Velvet have a new toy...

Black Velvet Travel have a new bus in service. Dennis Dart SLF/Pointer 2 162 (S162BMR) was acquired to replace one of two DAFs that suffered severe fire damage. 162's life began with Thamesdown in Swindon. 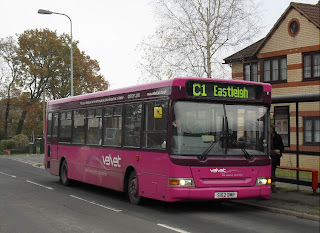 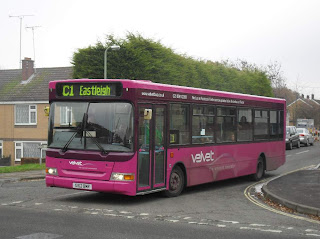 I've managed to grab a couple of shots of 162 in service. Seen today in Velmore, 162 is pictured on route C1 heading for Eastleigh. Velvet route C is a mixture of three routes - C1 Eastleigh - Velmore - Chandlers Ford - Hiltingbury, where it becomes a C3 Hiltingbury - Valley Park & Asda - Velmore and Eastleigh. C3s also begin at Eastleigh and become C1s in the other direction. Furthermore, the C2 operates during day time hours, hourly from Eastleigh heading for Chandlers Ford, Hiltingbury and Miller's Dale. The C was taken over from BlueStar nearly two years ago, where the route began in Eastleigh, terminated 3 miles away, yet went all round Hiltingbury and Chandlers Ford! 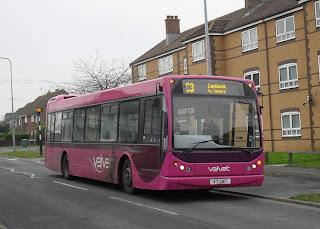 The pride of Velvet's early fleet were the 4 DAF SB220/East Lancs, originally used on the then-half hourly route A. Only two remain due to fire damage - one example is 507 (V7GMT) pictured right. 507 is seen heading for Eastleigh.
Velvet have also recently acquired one of Wilts & Dorset's DAF/Optare Spectra double decks - L711ALJ - as a DAF replacement and for use on Barton Peveril contracts. It is in allover white at the moment - probably to be repainted in the new year.
Posted by bus80d at 13:53