Brijan Tours are based in Botley, in Southern Hampshire, and operate mainly a network of coach services and school services. However, three bus services also are run by Brjan - all ex-Solent Blue Line routes. The 7 (Southampton - Bishops Waltham) and 17 (Bishops Waltham - Petersfield) are what's left of the old 52 route from Southampton to Petersfield. Darts are used on the hourly 7, with mainly minibuses on the infrequent 17. The 7 interworks with route 8 (Eastleigh - Bishops Waltham), a mixture of the old 48C and 48D routes in BlueLine days. To coincide with yesterday's post, Velvet aren't the only ones who have been purchasing Darts recently. 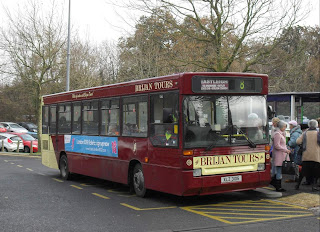 Five new Darts have been acquired by Brijan since February. The first is fleet number 107 (XLZ3106), a former Stagecoach Oxford and Western vehicle, although it was acquired from another independent. It was acquired back in February and some of you may have seen it in freshly applied Brijan livery back on the open day earlier this year. Former registration - N57KBW. 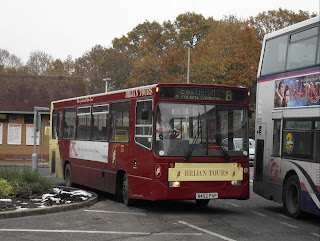 Brijan Tours have also been busy with Stagecoach directly. Former Chichester based N452PAP became the first Alexander Dash bodied Dart to enter service with Brijan, and is numbered 109. She is seen on the right at Hedge End rail station, heading for Eastleigh on route 8. Brijan have also have acquired a number of the former London Dennis Dart/Alexanders previously in use at Winchester - N317/8/21AMC. N318AMC and N321AMC have been painted in white for future sale, where N317AMC has been painted into Brijan livery for future service. I'm not sure if this one is out and about yet - it hasn't been uploaded on the online company fleetlist yet.
I hope to get the others soon, although Brijan is a company I don't photograph that often. For my photos of Brijan Tours, please click here.
Posted by bus80d at 14:04