Route 69 in the recent past

When my hobby of photographing buses began back in 2001-2, Stagecoach's route 69 operated hourly from Winchester to Southsea, via Fair Oak, Bishops Waltham, Wickham, Fareham, the M275 and Portsmouth city centre. Cut back to Fareham from Southsea more recently, this post depicts my memories of route 69. This post has been adapted from my original message to the Stagecoach South forum, click here to visit this growing forum. 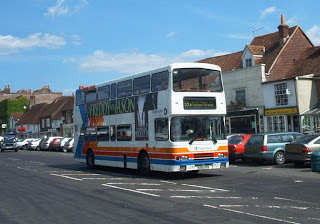 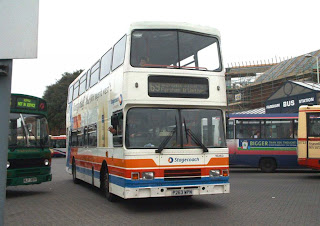 I first remember route 69 being operated by striped Volvo Olympians and Volvo B10M single deckers, symbolised by the photos to the left. My first image illustrates the 69 continuing to Southsea, as shown by 16290 (P290VPN) in Wickham in June 2003. Although I'm a fan of the swoops livery and preferred it over the stripes, the former livery was an iconic image and sadly missed by myself at least. The second illustrates Volvo Olympian 16263 (P263WPN), in Fareham bus station in April 2004. 16263 is seen with a friendly driver on board, heading for Winchester. 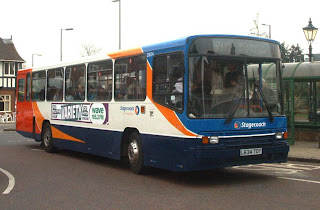 Volvo B10M single deckers were a common sight on the 69. Here is 20634 (L634TDY) seen having been repainted into the stropes livery, pictured in Wickham square in October 2003. I remember this bus arrived late and was packed out with passengers, as can be seen in the photo. 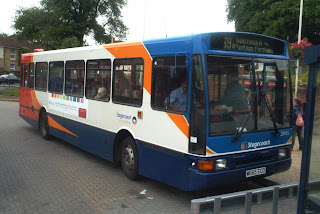 Northern Counties bodied Volvo B10Ms were rarer on the 69 - usually allocated more to the Basingstoke and Chichester depots. 20665 (M665ECD) is pictured in bay A of Fareham bus station on 4th July 2004, again heading for Southsea. This was a Sunday, and I seem to remember that single deckers were more common on Sunday than double deckers. 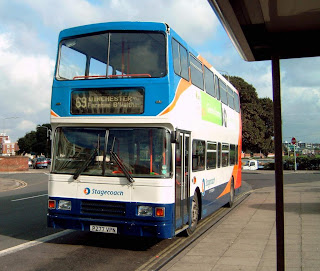 Back to the double deckers, and finally to South Parade Pier. I didn't realise when I took this shot that within a year or so it would be impossible. 16277 (P277VPN) has arrived from Winchester on the 69, and is parked up out of service waiting for the return trip. Photo taken 15th February 2005. Route 69 now terminates at Fareham rail station.
﻿ 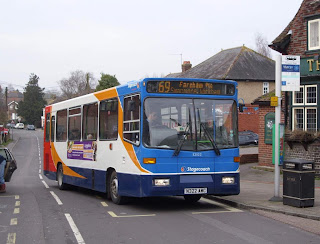 Before the recent introduction of the Dennis Tridents onto route 69, it was a mix of Volvo Olympians, Volvo B10Ms, and increasingly of Darts. I remember that Enviro200 workings were quite common on Sundays too- I photographed a "Spring" example in Fareham bus the photo failed, much to my annoyance. Here is Dennis Dart 32322 (N322AMC) in Fair Oak, pictured in January 2009. 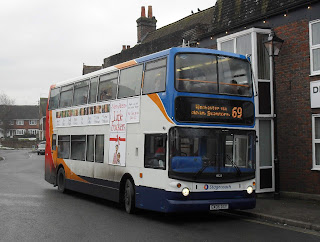 And finally, the new order on route 69. The Dennis Tridents displaced earlier in the year from Coastliner 700 have found their way to a number of different Stagecoach Hampshire depots- some to Winchester. One such example is 18523 (GX06DXY), pictured in Bishops Waltham on Friday. Route 69 is one of the country services to have also received "Rivers" branding, along with other routes such as the X64/X65. 18523 still wears a base fleet livery, allowing it to be used on a variety of services where needed.
Thanks for viewing. This post has been adapted from my original message to the Stagecoach South forum, click here to visit this growing forum.
Posted by bus80d at 23:47