The Third Snowfall of the Year

Last night, the South received its third significant snowfall of the year, although it was far less than either January's amount or earlier this month. I went to Fareham earlier this morning to find that the First Hants & Dorset bus network was largely unaffected in terms of routes in service, although diversions were (and are) still in place on some routes. 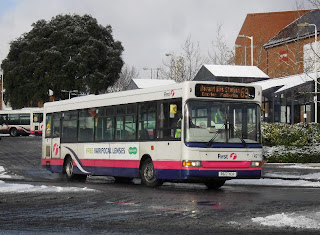 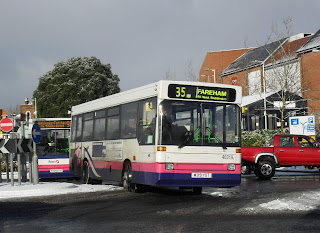 There were a high number of step entry Darts out on Fareham town services - here is 46319 (M319YOT) heading for Stubbington on route 35. Routes 33 and 35 were not going around Hill Head on Saturday morning, terminating in Stubbington. 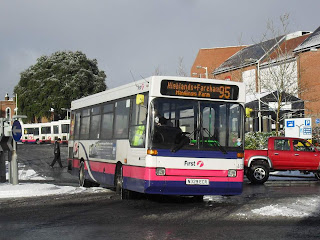 Another step entry Dart out in service, here is 46329 (N329ECR) heading for the Highlands on route 95. Unlike previous snowfalls, the Highlands routes were largely unaffected with only the 94 cancelled during my visit. 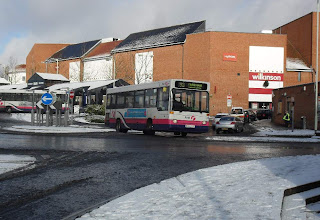 Fareham's main roads were largely clear this morning, with snow remaining on the back streets. Here 46322 (M322YOT) heads out of the bus station for the Highlands on route 93. Fareham town centre itself was largely free of snow as pedestrian paths had been cleared. 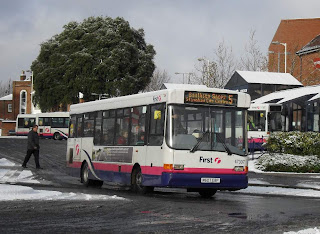 Finally for today, here is 47307 (N607EBP) heading for Portsmouth on route 5. During my visit, the 1A, 5 and 57 to Portsmouth started up - it appears Portsmouth received heavier snowfall as Hilsea depot was not in use before the 1000 FHD Service Update - all Portsmouth routes had been cancelled.  I'm sure this won't be the last snowfall of 2010 - let alone the winter season - so hopefully disruption will be minimal and oppurtunities for more snowy photos will be available. Thanks for viewing.
Posted by bus80d at 13:10