When it snows, the advice is always do not travel unless you have to. Naturally, whenever the snow stops, I jump on the train and travel to wherever buses are in operation... on Friday that was Portchester and Cosham, and this is the first in a three part report from the snow. First up is Portchester, second are some trains (hope you don't mind on a bus blog), and finally I have some Cosham shots.﻿ 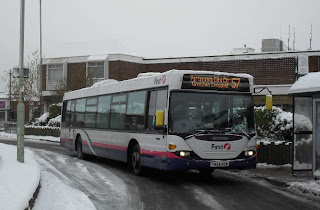 First up, here is First Hants & Dorset Scania 65022 (YN54NZW) pictured in Portchester Precinct. Scanias are common in Portchester, operating routes 1A and 5, but they very rarely make it onto route 57. 65022 is pictured heading for Portsmouth - one of the first through journeys (Warsash - Portsmouth) since the snowfall. 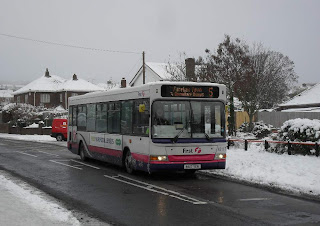 Route 5 was operational between Fareham bus station and terminating at The Hard, rather than South Parade Pier. Here is Dennis Dart SLF 42117 (R617YCR) along Station Road in Portchester. The roads were very wet but not icy at this point in time, and as you can see there is plenty of snow around. 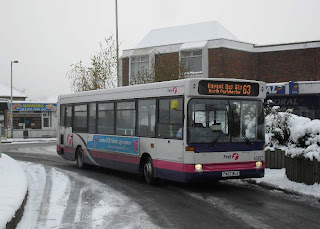 42407 (P407MLA) was new to London before moving to First Southern National, and it now is unique at Hoeford at being the only Pointer 1 bodied Dart SLF in service from that depot. She is seen here at Portchester precinct operating a route 63 to Havant on Thursday morning. Only the main roads were served, which actually increased the frequency to one about every 45 minutes! 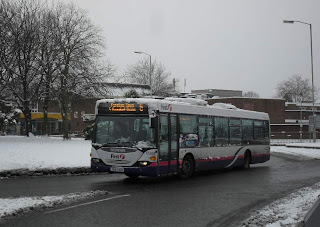 A nice cold shot of Scania 65008 (YN54NZD), heading round Portchester roundabout for Fareham on route 5. The buses came out of Hoeford fully dressed with icicles and snow! 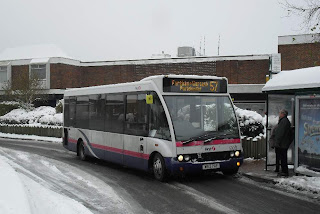 Another rare working on route 57, here former First Devon & Cornwall Optare Solo 53013 (W813PAF) is pictured at Portchester precinct. These buses are usually allocated to route 26, but at this point the 26 had not been reinstated. 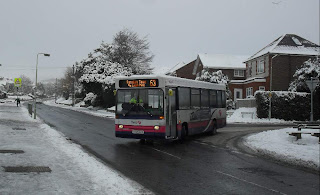 Pictured to the right is Dennis Dart 46329 (N329ECR), heading out of Portsview Road down toward Portchester precinct. 46329 is pictured on route 63, with a very snowy and misty Portsdown Hill in the background. 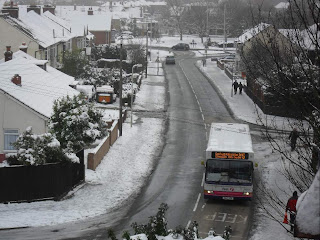 Finally, here is Dart SLF 42117 (R617YCR) returning to Portsmouth on route 5. This was my last photo, taken from the passenger bridge over Portchester railway station. We are looking southbound toward Portchester town centre. Thank you for viewing, I hope you have enjoyed the photos.
Posted by bus80d at 23:26