It has been confirmed that BlueStar are to play an active role in providing the 56/56A service between Southampton and Lymington. Buses will be in BlueStar blue livery, although it has been unconfirmed thus far whether they will continue (in part) to operate from Wilts & Dorset's Lymington depot.
﻿﻿ 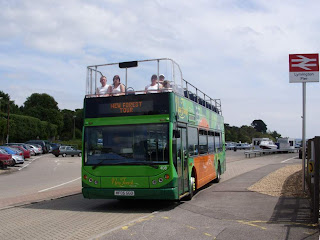 Unfortunately, information at the moment is still very much in the rumour stage - therefore anything I write on this blog could turn out to be wrong! What I do know so far is that Wilts & Dorset's Optare Solo 2655 (V655DFX) has turned up at Barton Park depot in BlueStar's dark blue livery, suggesting that the service could be operated by Optare Solos.
Then we have BlueStar saying they won't continue Solo operation on the 56/56A according to Facebook - bringing up the question whether 2655 is one of a number to replace the MPDs on the 10/11 which would push the MPDs onto the 56/56A- maybe introducing new stock (albeit with the same capacity) onto the 56/56A. Then there is a rumour that the 56/56A will interwork with the 10/11, again changing things completely. 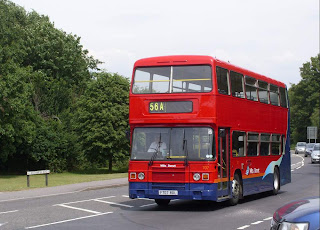 Combined with the fact that BlueStar guarentee a 100% low floor service fleet, new buses onto the 56/56A are guarenteed as the Leyland Olympians that regularly work the service at the moment will not continue. In an ironic twist some of them previously operated with BlueStar, such as 707 (F707RDL) as illustrated.
I'll keep you updated with developments as they occur - the 56/56A and the 65 are often routes I've thought may pass to BlueStar as they fit more into their network. Time will tell though, as what we are expecting to be the new BlueStar route 6 becomes reality...
Caption: BlueStar already operate into Lymington in the summer on the New Forest Tour. Here is Volvo B7TL 408 (HF05GGO) pictured at Lymington Pier rail station in summer 2008.
Posted by bus80d at 19:56