One of my aims for this year is to rediscover South Wales, where I last visited for a few days back in summer 2007. One of those afternoons was spent in the town of Caerphilly on a warm and sunny August day - I remember walking around the grounds of the castle and discovering the town. 2007 was an age where wireless broadband could still be unreliable - and it was before I had the laptop anyway - so much of my bus spotting was done by luck rather than judgement. I managed to get a good few photos from Stagecoach South Wales that afternoon - I seemed to be ignorning Veolia for some reason (I think it was due to my camera memory capacity). 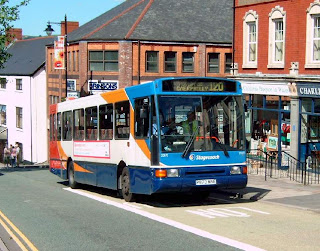 First up is Volvo B10M/Northern Counties 20873 (P873MNE), pictured arriving in the town of Caerphilly on route 120, which I believe came from Tonypandy and Pontypridd. Route 120 operates half hourly today - I'm not sure if that was also the case in 2007. I've just done a quick fotopic search on 20873 and she now seems to have left the Stagecoach fleet. 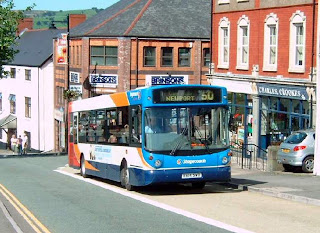 Route 50 operates between Newport and Bargoed every 30 minutes. Back in 2007 it was mainly operated by these Dennis Dart SLFs, as illustrated by 33614 (R614SWO). I found a number of these Darts also on route 122 in Cardiff, which operated along the road where my hotel was. 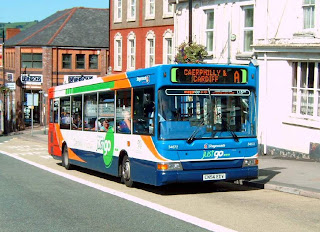 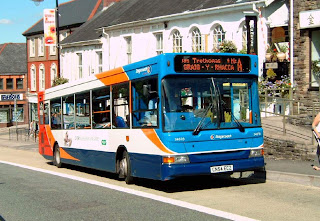 Relatively new and looking fantastic, Stagecoach South Wales operated these ADL Dart SLF with Pointer 2 bodywork on route A and B. Hourly journeys on the A and B extend to Cardiff, as illustrated by the left photo and 34672 (CN54EDV). However, the buses were branded more for the Caerphilly town network, as the A connected the town with Graig-y-Rhacca and the B to Senghenydd at every 12 minutes on the weekdays. The second photo on the right shows unbranded 34678 (CN54ECZ) on one of those shorter town variations. I believe this batch of buses still operates like this today. 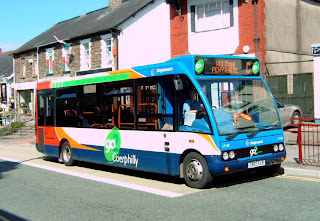 ﻿Finally, Stagecoach used Optare Solos in 2007 on some of Caerphilly's town routes that required smaller buses - namely town services C and D. Here is 47186 (CN05KUB) in the centre of town. I've only just realised Caerphilly has a bus station - mind you this location was perfect for the sun so I may try it again when I revisit!
Posted by bus80d at 11:56