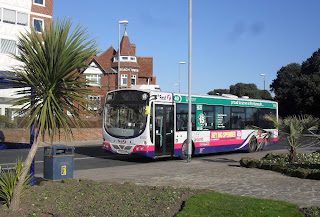 Photographed this morning in Southsea, here First Hants & Dorset's 69382 (HY09AOU) basks in the sunshine surrounded by palm trees. You wouldn't know its January!
69382 was operating route 40 (Southsea - Wecock Farm) earlier on today along fellow Volvo B7RLEs 69386, 69389, 69390 and 69392. 6 of this batch have Green Line Overground branding - with much of the Portsmouth Overground network having disappeared in recent years, it was a surprise to see branding applied to these buses. No buses wear Red Line 1 or Orange Line 17/18 branding anymore, with a dwindling number of Darts still wearing Blue Line 6 livery. I do like the branding though - this modified version of the Overground branding sits well on the Volvo B7RLE and looks good.
Posted by bus80d at 15:36