Following BlueStar's withdrawal of route A (Eastleigh - Hedge End - Hamble), in February 2008, three operators took over the service. Operating the weekday route, but with extensions to Botley rather than Hamble, were Velvet. Operating the Hamble-Hedge End section, plus the evening Eastleigh-Hedge End section, were First Hants & Dorset. Stagecoach in Hampshire took over the Sunday operation. 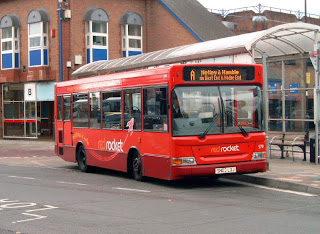 The old order on the Sunday route A. Here is Solent Blue Line 579 (SN03LDJ), pictured on Eastleigh Bus Station's stand A on Sunday 23rd September 2007. The Hedge End-Hamble section of route A on Sundays completely disappeared following the February 2008 changes. 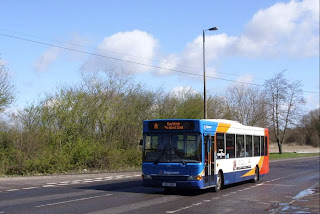 Stagecoach in Hampshire largely operate Dennis Dart SLFs on the Sunday route A in Eastleigh. Route A operates at a frequency of hourly with a lunch gap, allowing it to use one bus and the same driver (a viewer of this blog, as it happens!). Here is Dennis Dart SLF 33027 (NDZ3017), pictured in Mansbridge on the second Sunday of Stagecoach's operation of route A. 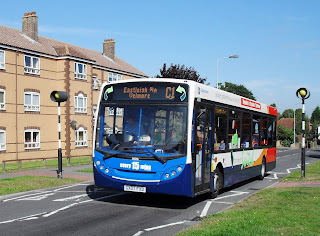 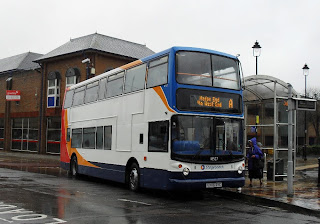 Very occasionally, Stagecoach in Hampshire use their Tridents on route A, where extra capacity may be required - such as on Bank Holidays. Here is 18527 (GX06DYC) pictured in Eastleigh bus station - on stand A - the same location as the Red Rocket MPD is pictured in the first image. 18527 is pictured on Friday 2nd April, this year. I think Tridents have only been used on route A three times; twice were due to cricket matches at the Rose Bowl.
If you fancy grabbing some shots of Stagecoach operations on route A in Eastleigh, here's the timetable.
Posted by bus80d at 16:57