The new order on the Lyme Regis town service are Damory Optare Solos, since the contract was won from First earlier on this year. 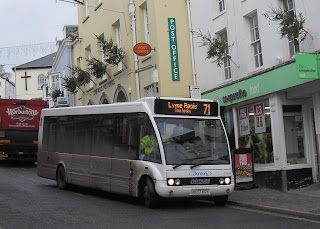 Damory 3708 - MX07NSV - Lyme Regis (post office)
The 71 was taken over by First in the summer of 2004, with a slimline Solo that was new as a demonstrator. Branded as connecting the Jurassic Coast, it was part of the big push with the arrival of the X53 Scania Omnidekkas, and the rebrand of the Dart SLFs from Southern National green and cream into First Barbie livery.
Damory took over this year, and I've managed to get to the Dorset town to picture the bus. It was a little disappointing to see in terms of presentation, but in terms of time-keeping it was excellent, and the driver seemed very professional and welcoming to the locals. Damory haven't really upgraded the service - although I suppose the Solo is two years younger, yes.
It seems a shame that First did lose this route as they are so strong in this area of Dorset - at least in terms of fleet presentation, age of bus, and, during the winter at least, time keeping and reliability. They've even outstationed a "thunderbird" bus at Bridport for emergencies. Still, in another world, Yellow Buses Geminis would have been serving Lyme Regis once an hour on the 31... An excellent service from First for what it is worth though.
Posted by bus80d at 22:05