Remembering Stagecoach on the A

As there are not many things happening during this precise week, between Christmas and New Year, I thought I'd remember Stagecoach's 3 and a bit years operating on Sunday's route A, between Eastleigh and Hedge End. This post is also dedicated to the regular driver on the Stagecoach A, who I'm going to leave unnamed at the mo, who helped with many of these photos! Thank you :-) 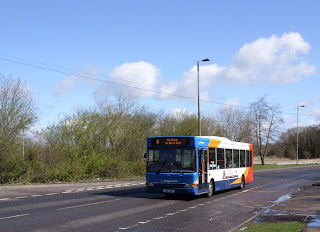 33027 - NDZ3017 - 21st March 2008
My first picture comes from one of the first weekends' of Stagecoach operation on route A, and shows two views of Dart SLF 33027, firstly in the sun at Mansbridge, followed by another view of the same bus at Hedge End superstores. 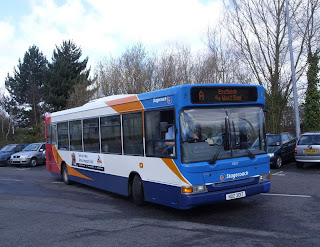 The A took Stagecoach into land where they have not served for many a year and, to me at least, seemed quite a strange decision initially. Now it is sad they've disappeared, which mean my local SC services either are at Fareham (69) or Southampton (46). 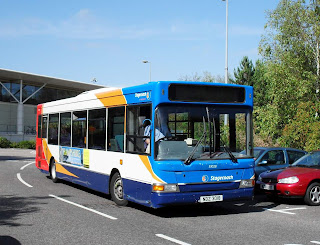 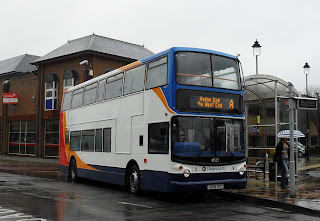 18527 - GX06DYC - 2nd April 2010
Double deckers did not regularly feature on the A, although on Bank Holidays Stagecoach did tend to use the buses in case of extra high loads. Furthermore, on days where the Rose Bowl cricket ground had England matches, double decks were used. Here is 18527 freshly repainted and transferred to Winchester, following the delivery of new Scanias for Coastliner700. 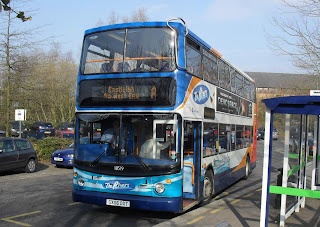 18519 - GX06DXT - 20th March 2011
I'm not sure if 20th March did have any particular bank holiday associated with it, or whether this was just a one-off allocation (I can't remember), but here is Rivers branded Trident on route A at Hedge end, making a rare foray south. The Rivers Tridents are usually allocated to routes such as 64/65 to Guildford, or 69 to Fareham. Again, another shot not down to luck but thanks to the Sunday A's regular driver - much appreciated again!
Alas, the days of Stagecoach on the A are over and now First have control of the Sunday contract. With Stagecoach also venturing to Eastleigh on the C and E Sunday contracts during this time, and regularly covering the Rail Replacement services, Stagecoach could be back one day...
Posted by bus80d at 11:46