My first post for a while reminisces back to 2006, when Hoeford depot operated no less than 5 Leyland Olympians. They were all second hand and had seen a lot of service elsewhere in First, but were proper buses and popular among enthusiasts at least. It also marked a turn away from the previous Hoeford policy of only needing one double decker - for years VR LWU471V had been the only double decker, and now that had been replaced and 5 deckers were in service... 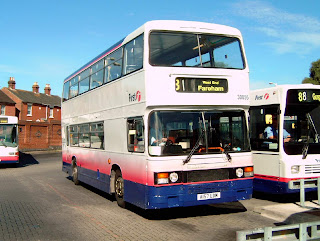 The first to arrive was former PMT 30056 (A157UDM), arriving in 2005 and working alongside another former PMT DOG - MTU124Y, which was quickly withdrawn. This marked a time where First in the Potteries were jettisoning some of their elderly Olympians to work out their final years in the south - First Devon and Cornwall also received a number. 30056 is seen reversing off of a stand in Fareham bus station, working the West End circular to the college. Pictured on a sunny 25th August 2006. 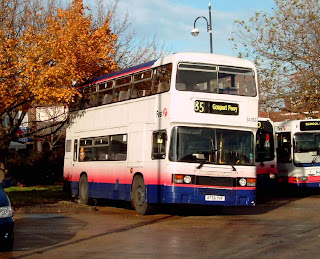 Two former Western National Olympians were operated by Hoeford. These were A756VAF and A757VAF, which had originally passed from First Badgerline to First Southampton's Portswood depot, before moving to Hoeford late in 2005. 34756 (A756VAF) is pictured in an autumnal Gosport bus station out of service and broken (hence the lean on the bus). It was later repaired and saw service until the Volvo Olympians took over in 2007. 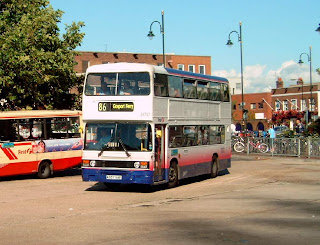 The other in service at Hoeford was 34757 (A757VAF), which I remember catching on route 80 back in the summer in 2006. It was a fantastic bus - so fantastic that it's roof lives on as part of the roof on Weymouth's N528LHG, an open top Olympian that argued with a bridge in Southampton, and lost. 34757 is seen on premier route 86, in Gosport bus station on 23rd September 2006. 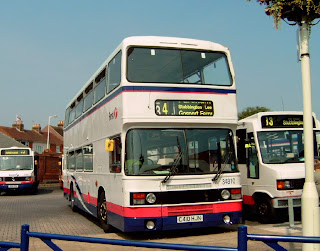 Two Olympians acquired late in the day proved to be some of the best. First up is former First Eastern National 34810 (C410HJN), which was replicated as a model by Exclusive First Editions, actually on route 34 with this blind set. I often wonder whether this photo provided the inspiration :-) ... pictured in Fareham bus station on 26th July 2006. 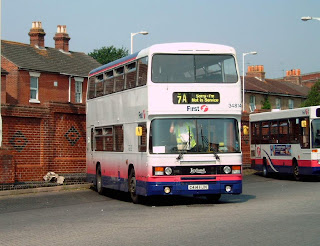 Finally, a second example acquired from First Eastern National was 34814 (C414HJN), which was the last Olympian in this series of photos withdrawn from service. 34814 is pictured on the wall in Fareham bus station. This, along with 34810, was transferred to Weymouth when the Volvo Olympians arrived in Hoeford, although 34814 was only withdrawn in the last couple of years. It was also treated to a repaint into the modern First colours.
Hoeford now operates 8 Olympians on last count -
* former Stagecoach London examples P542/3HMP
* former Stagecoach Cambus examples P536 / 540 / 559 / 560 / 571 / 572 / 578EFL
... which is the highest number of double deckers at Hoeford since First took over.
Thanks for viewing - sorry about the lack of blog entries recently, life has been very hectic!
Posted by bus80d at 11:00