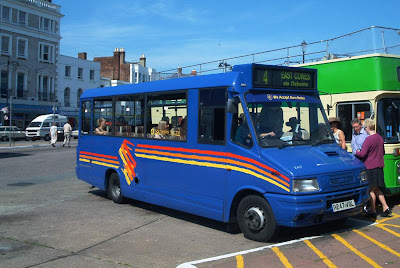 Southern Vectis 247 - P247VDL - Ryde bus station - Summer 2002
10 years ago this summer, Iveco TurboDailys with 2+1 coach seating were the regular buses on route 4, connecting Ryde with East Cowes. The service back then was operated by a variety of Ivecos brand new to Southern Vectis, some ex-Stagecoach Devon examples, along with two former Solent Blue Line buses. PVR was 2, and the route was operated at every 30 minutes. 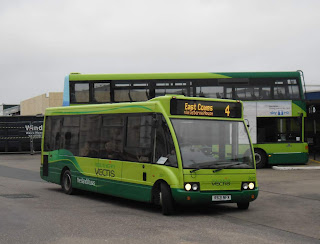 Fast forward to nearly 10 years in the future, and we now have Optare Solos on the route. You will note that this particular Solo is less than a year younger than the Iveco that was replaced back in 2005. 2621 (R621NFX) is pictured on the now hourly route 4 yesterday.
However, I must qualify some information with this post. The decrease in route 4 from two to one bus per hour, has been met with an increase to 6 buses per hour from Ryde to Newport. Furthermore, the Solo gives extra seating capacity plus low floor capability. Moreover, the Ivecos were directly replaced by MPDs - a significant upgrade to the route. Many of these are now found at Salisbury, unfortunately - where this particular Solo was operating in 2005. Finally, as often commented on Omnibuses, the Solo has only just been withdrawn from production - therefore 61 plated Solos can look identical to R plated Solos, and serve the customer no less well.
Posted by bus80d at 18:48