As many of you will be aware, a Bus-Rapid-Transit system is being introduced along part of the old railway line between Fareham and Gosport. This has reached Wych Lane and work is being done on the bridge, leading to the partial closure of Wych Lane and the redirection of First Hants & Dorset services 85, 86 and 88. 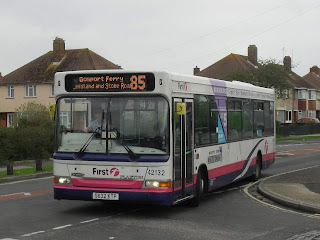 The 82, 83, 85 and 86 are expected to, in changed forms, be the four main routes that use the BRT when it opens later this year/early 2012. These routes are presently operated by Dart SLFs new to First Provincial which carry Gosport-Fareham branding - here is 42132 (S632KTP) arriving in Nobes Avenue from the wrong direction, caused by the closure of Wych Lane bridge. It has been confirmed these Darts will be replaced by 14 brand new single deckers later this year - the type hasn't been confirmed yet but they will wear a special BRT livery. 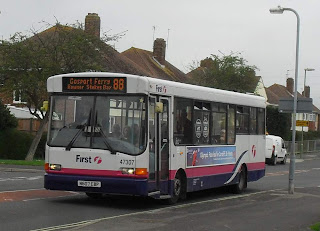 Ironically, Bridgemary receives a better bus service because the 88 (Fareham - Gosport, via Rowner and Stokes Bay) has to be redirected. Here is UVG Urban Star bodied Dart 47307 (N607EBP) arriving in Bridgemary on an 88 for Gosport. 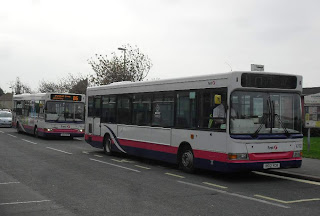 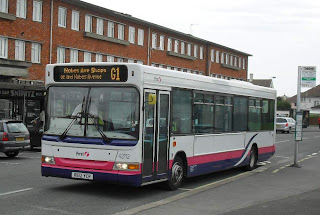 With the closure of Wych Lane around the bridge, and subsequent re-routings, a special shuttle service has been introduced to serve the areas affected by the changes. The G1 is a circular route of Bridgemary, serving Wych Lane, Tukes Ave and Carisbrooke Rd - areas where the 85, 86 and 88 temporarily do not serve. The G1 operates every 15 minutes, and passengers can hop off of the G1 and on to the 85, 86 or 88 at Nobes Avenue. The first photo shows 42131 (S631KTP) arriving on an 86, with passengers transferring over to the G1 on stand, operated by 42112 (R612YCR). The second photo shows the 42112 with the LED display turned on - the 'via' points give details of the routes served. The G1 takes about 10 minutes to circulate Bridgemary, and then stands at Nobes Avenue shops for 5 minutes collecting any passengers.
I'll keep you updated with future changes due to BRT - as we get closer to the start date (which seems to be placed later every month!), coverage of the BRT will increase. I'm looking forward for 14 brand new buses in Fareham too - I think the last brand new bus to Hoeford (excluding school buses) was Solo YN03ZVW, arriving as Solo 734.
Posted by bus80d at 15:42