In the summer of 2003, I stayed in Pulruan, Cornwall on a family holiday. Pulruan is opposite Fowey in the mouth of the River Fowey, and about 6 miles from St Austell. Back in 2003, the first cuts of the then First Western National network had just taken place but the St Austell network was still large and varied. 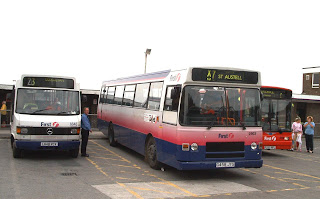 The bus station has changed, the buses have all changed, and none of the routes even operate anymore. The Dart SLF on the far right, 4516 (P255RFL) had just been acquired from London, with the Volvo B10M in the centre 2903 (G458JYG) from First West Yorkshire. They are operating the mammoth route X7, which operated, if my memory served right, from Penzance - Helston - Falmouth - Truro - St Austell - Eden Project. Unfortunately at this time, the buses didn't have Eden Project on the blinds, so they displayed St Austell. The Merc 709D on the left - 6648 (L648VCV) is operating the long-gone 23 to Luxulyan. Western Greyhound now operate the 523, but at a far reduced frequency. 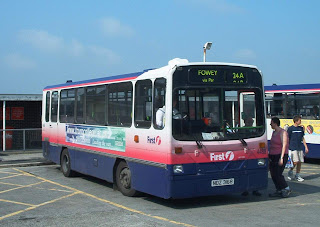 One of the few routes FDC still operate from St Austell is the route to Fowey - here route 24 (despite the blind), but now route 25. It usually sees Volvo Olympians these days at a term-time half-hourly frequency - here the 24 was half hourly but saw any single decker during my visit (probably was Bristol VRs in term time). Here is former London 4488 (NDZ3168) loading in St Austell bus station. 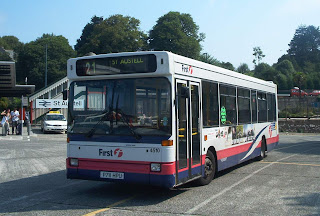 One of First Western National's main routes was the 21 to Newquay. This quite quickly moved over to Western Greyhound after my visit - here Dart 4510 (P711HPU) arrives in St Austell bus station. 4510 was one of the few low floor buses in use in St Austell at this time! 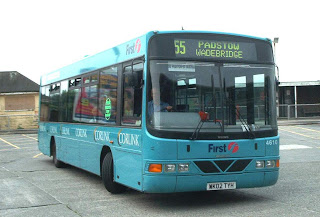 Part of the ever-dwindling Corlink network was route 55 - the Padstow - St Austell route, via Wadebridge and Bodmin. At various later times it was extended to Truro and/or the Eden Project, but in 2003 it was operating hourly from St Austell using these Volvo B6BLEs. 4610 (WK02TYH) is now 48272 and in service from Plymouth, pictured here departing for Padstow. The 55 is now operated by Western Greyhound, in the form of the hourly 555 from Padstow to Bodmin Parkway rail station. 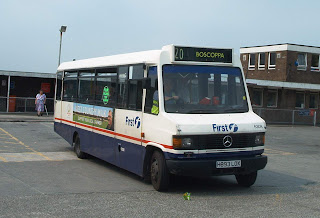 Another route to disappear fairly quickly after my visit was the old St Austell town service - route 20 to Boscoppa. It mainly saw these old Merc-Benz 811Ds operating it - here is 6308 (H893LOX) in modified Western National livery. There is no form of route 20 today although the hourly Western Greyhound 527 from Newquay - Eden Project via St Austell serves Boscoppa. 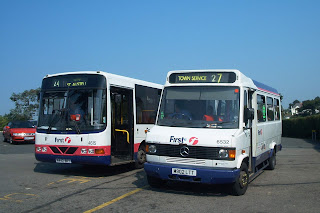 Back in 2003, First Devon & Cornwall operated route 27 - a Fowey Town Service - at every 15 minutes to help the residents move around the very hilly village. Two Mercedes-Benz 609Ds saw the majority of service on this route as it passed through the narrow streets of Fowey - here is 6532 (M902LTT) pictured in Hanson Drive car park, Fowey. The Volvo B6LE was a new addition from First Mainline (South Yorkshire) - 4615 (N442BKY) was a number of these buses acquired to increase the number of low floor buses in Devon & Cornwall, reduce age profile - and 4615 was one of only a few to see service away from Plymouth. 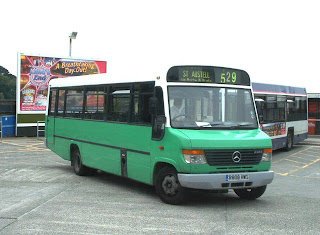 And finally, a sign of things to come in St Austell. Western Greyhound are now the main operator in the Cornish town - and back in 2003 they had already taken over the operation of the Bodmin - St Austell route as the WGH 529. At this point, the Varios were also receiving green for the first time - here is R808HWS still without Western Greyhound fleetnames.
Note: Truronian did also operate into St Austell at the time of my visit - I appear to have misplaced the photos though.