Yesterday, I visited Guildford for the first time. By train it is about 45minutes south west of London, and the principal operator is Arriva Southern Counties. There is also a significant Stagecoach presence operating key Guildford - Alton, Aldershot and Haslemere routes, and the local independent, Safeguard, also has a key role in the city. 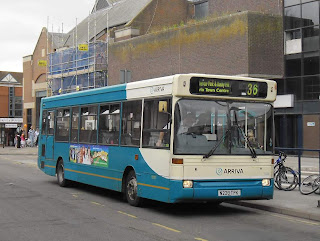 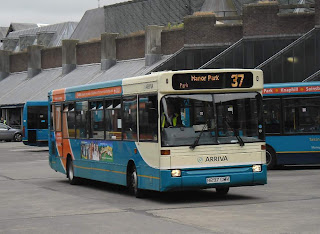 The most common bus in Guildford is the Dennis Dart/Plaxton Pointer that are operated by Arriva. They operate the majority of the town routes, alongside a smaller fleet of DAF SB120/Wright Cadets. The majority wear fleet livery - either the old version, as illustrated here by 3028 (N228TPK), although repaints into the new livery are common too. Also, some have branding, as illustrated to the left by 3097 (R297CMV) to show the frequency of the University - city centre services. 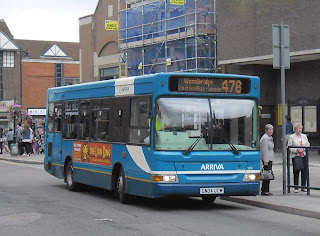 Two MPDs are operated at Guildford - one is 1606 (GN04UCW). Having never taken photos of Arriva in such a large concentration before, it was interesting to see that the MPDs are numbered with the minibuses in the '1' series, rather series for midibuses, as First and Stagecoach do. 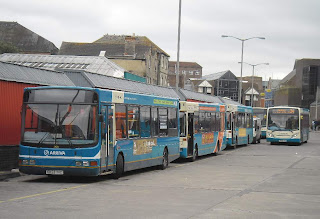 Cadets form an important part of Guildford's city bus network - here is 3938 (GK52VYC) heading the buses out of service, standing on the wall in the bus station. Incidentally, buses are only supposed to remain there for 45 minutes - 3938 was there for my entire visit... 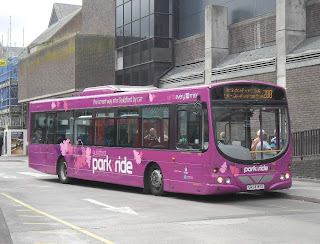 Arriva use a number of Volvo B7RLE/Wright Eclipse Urbans on the two Park and Ride contacts they operate - here is 3735 (GN54MYU) unloading passengers in Guildford city centre. 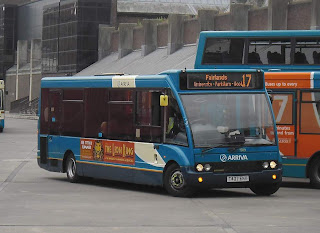 Arriva Southern Counties have just received 4 former MK Metro Solos for city work in an attempt to remove the last Varios from service. The only one I saw out and about was 1509 (T407ENV), pictured here reversing off the stand on route 17. 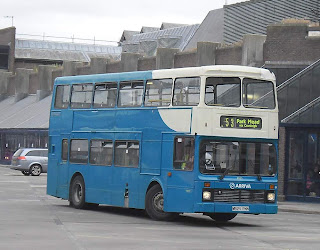 Finally from Arriva, here is Volvo Olympian 5925 (M925PKN), which I am reliably informed tends to stay on school services, so I am even more chuffed I managed to photograph it yesterday. Pictured departing Guildford on route 53. 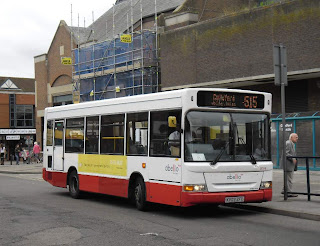 Abellio Surrey operate once an hour into Guildford on route 515 from Kingston using these Mini-Pointer Darts - this one is 8094 (KV03ZFX), which was new to Tellings Golden Millar. 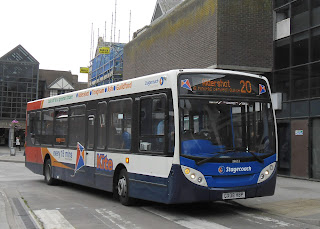 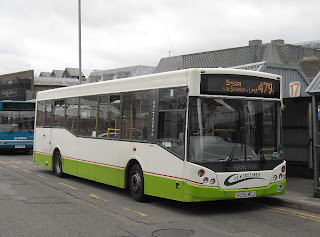 Countryliner also operate a number of services into Guildford, mainly using a mixture of Darts, Olympians and Evolutions. Here is MAN/MCV Evolution MRM4 (AE56MDJ) about to load passengers for Epsom on route 479. 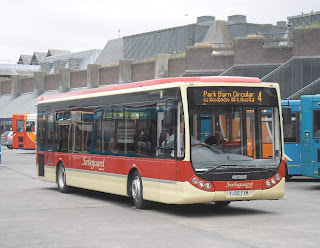 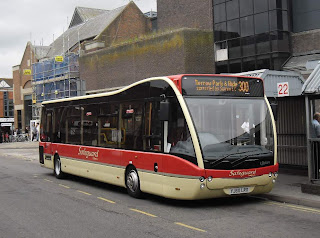 The main independent in Guildford is Safeguard, which operate mainly a fleet of low floor saloons on city services and Park & Ride route 300. My first image illustrates Optare Tempo YJ06FXM departing the bus station on circular service route 4. I think the Safeguard livery suits the Tempo very well. My second image illustrates Optare Versa YJ60LRO taking the place of a P&R branded Dart on route 300. These are very smart buses and, again, I feel that Safeguard's livery suits the lines of this bus very well. From the outside, the whole fleet looked very well presented and certainly gave the impression of a quality operator.


Many thanks for viewing.