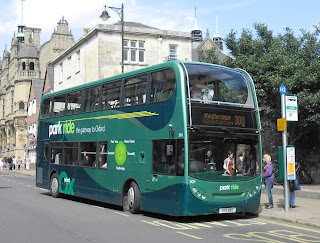 Here is 301 - interestingly registered HY11BRD (Oxford do love their personalised registrations...!). I personally prefer this new livery - the greens are smarter shades and the buses just ooze quality. We all know that the waves at the bottom of the bus work well - for example Southern Vectis and Brighton and Hove use them and both liveries look excellent. This is livery in the same mould and certainly works in my opinion. 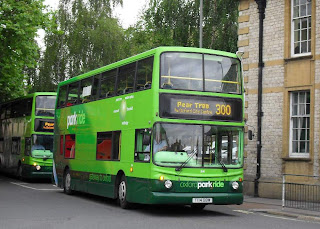 This is the livery being replaced - Trident 114 (T114DBW) illustrates lighter shades of green used. The new shades of green are more stylish in my opinion and definately reflect the upgrade and investment in the Park and Ride services. The existing Tridents seem to be being retained by OBC - used on a variety of service work and Brookes Bus contracts. 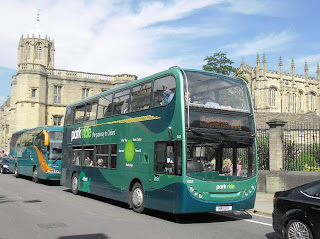 Of the 17 Enviro400Hs now in service, I managed to capture all but three on camera.  Here is 302 (HB11OXF) outside Christ Church in Oxford city centre. 302-17 have the "regular" personalised registrations - all ending with OXF. 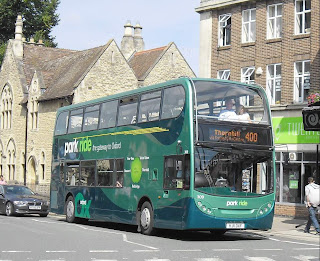 The rest of this blog is really just illustrating further examples of the fleet in and around Oxford city centre on Park and Ride routes. Here is 309 (HJ11OXF) at the top of New Road, approaching the bus only stretch of road in Oxford city centre. 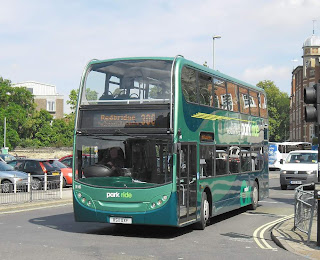 A nearside view of E400H 316 (HS11OXF) as it heads onto New Road from the direction of the coach station. All of these photos were taken last Friday on 19th August. 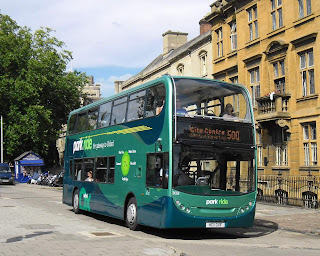 A particular favourite location of mine in Oxford is the Magdelin St area, where from 1.30ish, the sun is perfect for buses arriving in the city centre. As well as the P&R routes, you have Gold Stagecoach E400s, the Stagecoach United Counties coach on the X5 from Cambridge, the joint Stagecoach/OBC 2/2A/2B and more. Here is 303 (HC11OXF) at about 1430. 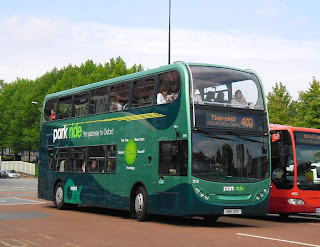 Finally, here is E400H 315 (HR11OXF) at the stop near Oxford rail station. The rail station is a great place to take photos (apart from taxis and delivery vans) - there is a bus station at the rail station itself, and then a precinct area just across the road which has even more services, plus those which terminate at the rail station. Oxford certainly keeps you interested for a good 5 hours +, and if anyone hasn't been in a while, I would advise you to go back - you won't be disappointed (although the variety in both Stagecoach Oxford and OBC fleets is down on any previous year...). You must like Enviro400s though, with 3 operators operating the type, in 7 different liveries, they are the most common double deck in Oxford.
More on Oxford coming later this week.
Posted by bus80d at 11:05