During my recent trip to Wales, I found many connections with home, such as old local buses operating in new areas, or buses from the same batch as what we have locally. This post documents some familiar buses I found while up in Wales. 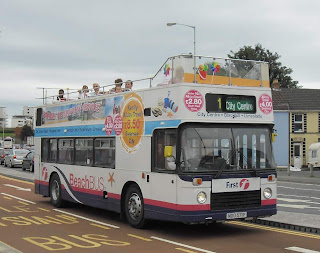 I'll start MOD571P - Weymouth's old VR that has moved on to Wales for yet another year's worth of service. The load leaving the bus station around lunchtime was fully loaded, so hopefully MOD may be back next year too! She looks very smart and seemed to be performing well. 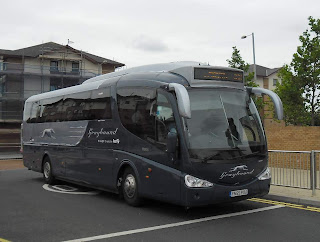 The Greyhound division of First now operate the "Shuttle" 100 between Swansea and Cardiff - here 23318 (YN55PXJ) or "Mandy" arrives in Swansea bus station. This coach was originally used on the Southampton and Portsmouth to London Greyhound routes. 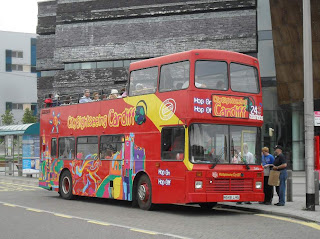 The batch of N---LHG Olympians new to London Central seem to have been dispersed everywhere - in Southampton, examples entered service with both First Hants & Dorset and Solent Blue Line. Here is N548LHG in service on the Cardiff sightseeing tour. First Hants & Dorset still operate N528LHG at Weymouth as an open topper as well. N548LHG is pictured at Cardiff's Millenium Centre in Cardiff Bay. 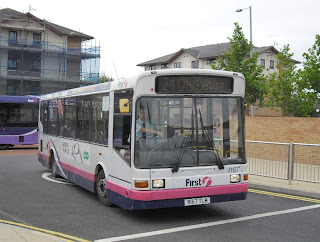 Swansea is the new capital of Marshall bodied Dart SLFs - all of which are second hand and previously with London. 41167 (R167TLM) is sister vehicle to both R165/6TLM in service at Hilsea depot at First Hampshire, and were at First Berkshire together after leaving London before moving on. 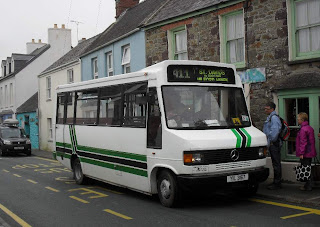 This little Mercedes-Benz 709D is registered YIL3167 - but is actually L899VHT, new to Bristol Cityline. This is a rare bus - a bus that left First to see further service in the UK with another company. Certainly good to see it out and about - and still retaining fully functioning dot-matrix number displays. Pictured in St Davids - operating the Sunday only 411 St Davids - Haverfordwest with Summerdale Coaches - Richards do the weekday/Saturday service. 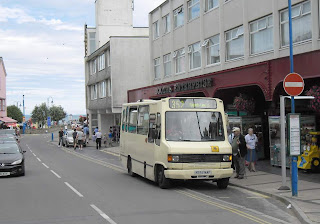 Finally for today, here is former Stagecoach East Kent Mercedes-Benz 709D N952NAP, which is now in service with Silcox Coaches in Pembrokeshire. There are still some of her sister buses in service with Stagecoach (for example, at Andover). She is pictured in Saundersfoot, near Tenby.
Many thanks for viewing.