Good afternoon everyone - I'm back with a post after a month's absence. Sorry for the lack of posts; I've been away for two of the weeks and other commitments also. Over the coming weeks the blog will hopefully be quite active - from September posts could reduce again but I'll keep it going and see how we go! 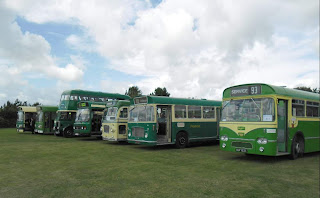 Yesterday was the ninth rally at Stokes Bay, Gosport, organised by the Provincial Society. Over 70 buses attended, and although it was quieter than it has been in the past, in this economic climate I believe it was a great success. Thank you to all bus owners who brought their bus along - especially in these tough times your efforts are greatly appreciated. 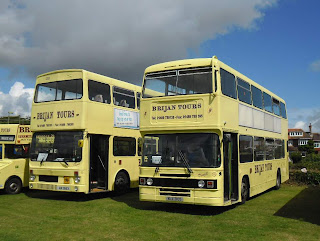 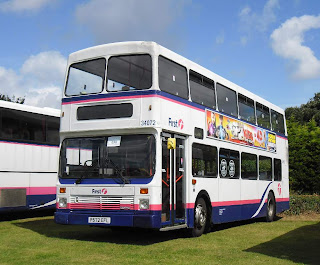 As always, the rally was greatly supported by First Hants & Dorset and Brijan Tours, who brought many of their own buses along and always play a massive role in making the rally a success. Since they've arrived in Hampshire, First usually bring one of the EFL Olympians along- yesterday was the turn of 34072 (P572EFL). 34072 is the only Olympian in service with FHD to have a white and pink grill - the others have a more traditional black grill on the Northern Counties Palatine bodywork. Brijan also brought along their fair share of double deckers - here are two of them - Metrobus SUI7653 and Leyland Olympian XLZ3105. The Olympian, new as C82CHM, in particular looked very smart. The Metrobus has recently received a new registration - previously UVY412 and new as F764EKM to East Kent. 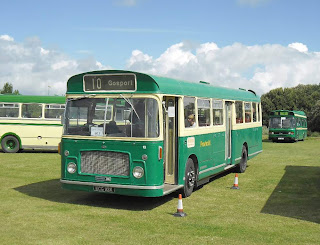 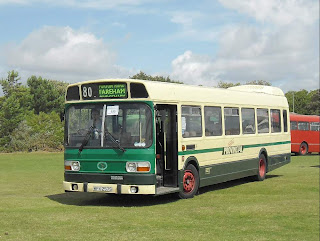 Preserved Provincial buses always feature high up on the agenda at Stokes Bay and yesterday was no exception. Leyland National 76 (WFX257S) and Bristol RE 12 (ECG112K) are pictured here in service on the day. 76 is just going out for the cavalcade, where 12 is loading passengers at the rally bus stop. Both are wonderfully preserved vehicles and reflect two liveries of years gone by that are very fond with local enthusiasts. 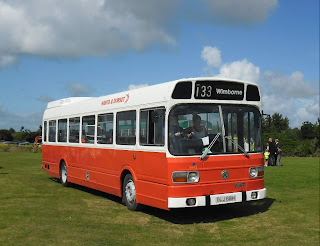 Hants & Dorset Leyland National GLJ681N arrives at the rally sight looking fantastic in the morning sunshine. The weather, if a little windy, was very good and the rain stayed away. 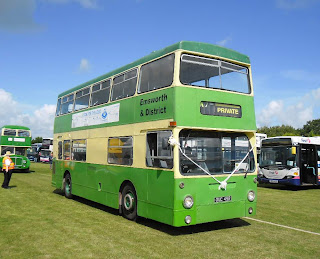 Former Bournemouth Transport and Wilts & Dorset Fleetline OUC45R arrives at the rally site. At present it belongs to Emsworth & District in a semi-preserved state - as can be seen by the wedding bow it is used for special occasions. 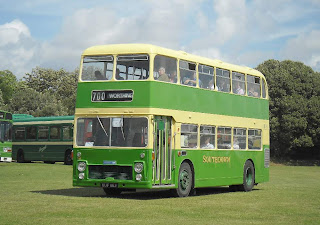 There were a large number of preserved Southdown vehicles that attended the rally, which was great to see. Here is Bristol VR UUF116J heading out for the cavalcade in the early afternoon. 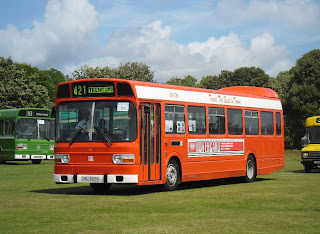 Finally, here is a company from a bit further afield. Trent Buses GNU568N is rather new to the rally scene in this livery and it does look excellent. She is heading out for the cavalcade around Gosport.

Once again, I would like to end by saying a massive thank you to all bus owners who brought their bus along yesterday. These events could not be successful without you. Thank you very much.
P.S. The blog layout editor seems to have had a bit of a mind of its own today - I do apologise - hopefully this will be sorted by blogger soon!
Posted by bus80d at 13:32