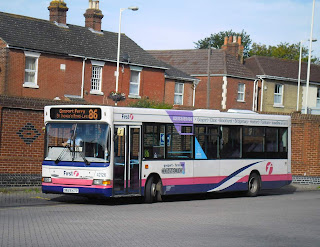 For example, 14 single deck buses are entering service at some point for the Fareham - Gosport Bus Rapid Transit link, but the date for BRT has been delayed time and time again... when will these buses arrive? Will they operate on the old routes because BRT won't be open in time? What will happen to the Darts presently on the Fareham - Gosport routes? What will these buses replace and where? Pictured above is one of the Dennis Dart SLFs likely to be replaced at the end of the year / start of next year... will it be replaced? Will it stay at Hoeford? What will 42126 (S626KTP) replace in turn?
Now, bus companies usually find a lot of speculation unhelpful. As I have never worked for a bus company, I can't comment on this specifically or from personal experience, although I can imagine that if speculation gets out to the wider travelling public, unwanted rumours may start, which could jeopardise operations. It is refreshing to see that both of the main local companies around my way, First and Go South Coast, are excellent at quashing rubbish immediately. Of course, where events will make be clear in the near future, company managers also probably enjoy a chuckle at some of the speculative scenarios suggested!
I can write from a website creator's point of view. When trying to update the fleetlists on the First Hants & Dorset website, our forum has an excellent team of reliable contributors which makes my job easy. However, when new buses are due - especially when the fleet numbers and registrations are given - it makes the consequential questions incredibly hard to avoid. I've had three colour system news pages before on "what is confirmed", "what is probably following" and "what could happen". Plans change even within the company at the last minute. 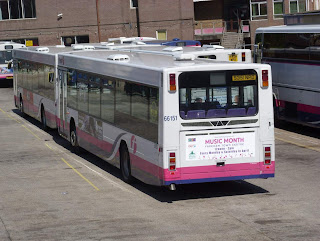 For example, take this view from Portswood depot on 1st May 2009. Following the arrival of Hilsea's Volvo B7RLEs, a number subsequent FHD-internal transfers meant that 9 Volvo B10BLEs were to be cascaded to Sheffield. 66151 (S351NPO) is pictured here along with 66196 awaiting transfer up north. This fell through at the last minute, and now have seen two happy more years' service at Hoeford, and are still there today. The transfers weren't speculation - they were the plan - but it shows how pointless speculation can be, if even confirmed transfers can fall through at the last minute.
So what is speculation for? Well, personally, I believe it is a side effect of our enthusiasm and excitement over something new happening. It isn't helpful to ourselves, let alone the companies, travelling public or other enthusiasts. Take the Go Ahead Tempos that have appeared on the Isle of Wight. Are they for MOT before repaint, or are they for route/type testing, or ready for school contracts from September? I don't know the answer, but it could be one of those three. On the other hand, I could equally be quite off the mark.


Speculation is a natural response to fill a void of information, and although one can keep a check on it, I don't think you can quite ever completely never speculate...
Posted by bus80d at 23:34