One of an ever decreasing number of routes to remained unchanged since the takeover of big national companies is the 126, connecting Weston-super-Mare with Wells in Somerset hourly. The route is operated by First Somerset and Avon - previously Badgerline. 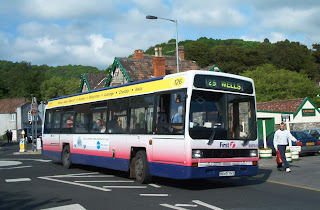 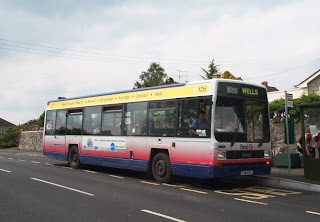 The 126 is the route that I consider to by "my" Somerset route. When I was younger, I stayed in Cheddar for a few days. The 126 was the main route that served Cheddar, back then using Leyland Lynx buses. Pictured around May 2003, here are firstly 1645 (H645YHT) and secondly 1610 (F610RTC), both pictured in Cheddar village. As illustrated, First Badgerline decided to brand these buses for the 126 in 2003, and the branding is new in these two images. Back then the depot was "Weston and Wells", and the depot allocation code was WM - as illustrated by both buses' fleet numbers. 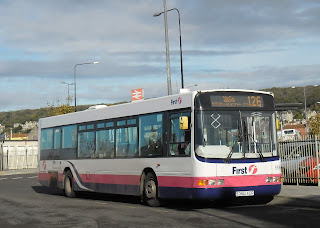 Today was the first time I have photographed route 126 since May 2003. Today, the usual allocation are Volvo B10BLEs - usually a mix of former Provincial buses - so therefore buses I know well and another reason I can associate myself with the route. Pictured to the right is former Hilsea and Hoeford based Volvo B10BLE 66160 (S360XCR), a bus that I last photographed at Southsea's South Parade Pier in 2008. 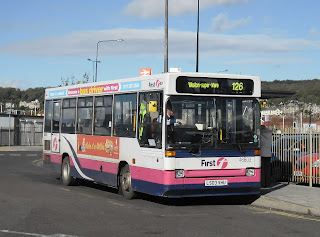 Between the Lynxes and the Volvos, Dennis Darts and Dennis Lances ran the 126, so 46603 (L503VHU)'s appearance on the route today is a helpful "transition" image. An appearance of a Dart on the 126 is rare these days, especially as only two step entry single deck buses are now in service from Weston-super-Mare's allocation.


I had a great day in Weston today taking photos - I'll post some more to the blog over the coming days. For late October, the sun didn't play me up half as bad as I had expected.
Posted by bus80d at 21:55