My next instalment from Norfolk comes from Great Yarmouth. This seaside town sees First as the major operator, supplemented by Anglianbus, Sanders and a couple of other fleets. 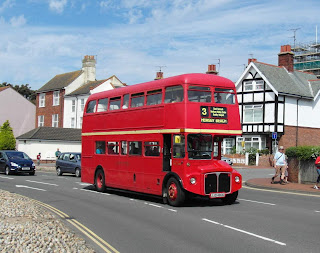 First Eastern Counties operate the majority of the town services. Some, such as the 3, are developed over the summer to make use of the extra summer trade. Route 3 connects Hemsby Beach and Vauxhall Holiday park with the town and the beach. Four buses are used - two Routemasters and two Volvo B7TLs. This is 39480 (JJD480D), pictured going past Priory Plain in the town. The other Routemaster is NML623E, which was also out earning its keep during my visit. 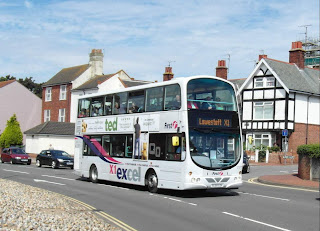 The X1 is First Eastern Counties' premier cross county route, connecting Lowestoft in the south with Peterborough in the north, via Great Yarmouth, Norwich and Kings Lynn amongst other places. This is Volvo B9TL 37577 (AU58EDF). 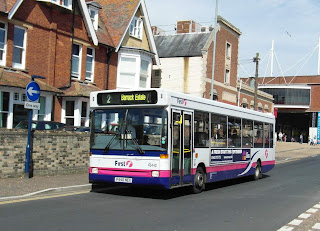 First have just purchased a number of second hand Enviro200s to improve town services in Great Yarmouth. Until these are ready, the older order prevail, as illustrated here by 43440 (P440NEX), heading off on route 2. I always think these Darts look better with the blue under the windscreen. 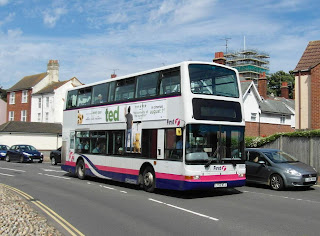 The most common type of bus in Great Yarmouth are former London Volvo B7TLs. Illustrating the batch is 32203 (LT52WTG). 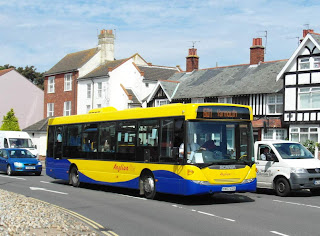 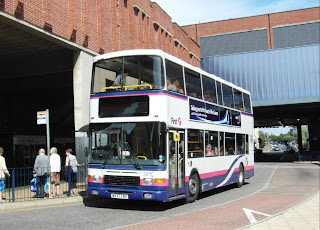 In 2005, First acquired a number of late Volvo Olympians from the Yorkshire Coastliner outfit. Initially allocated to First Somerset & Avon, they moved onto First Eastern Counties later in their life. Here is 34110 (W437CWX), heading through the bus station on route 1. This bus was one of a number that used to compete with First services around York and Leeds. 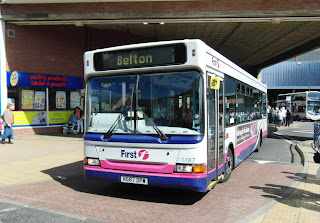 Another native Dart, this time with Pointer 2 bodywork. 43487 (R687DPW) heads out of the bus station on route 7. Great Yarmouth once had a really interesting fleet of Darts with East Lancs and Carlyle bodywork; unfortunately these days they are more bog standard... 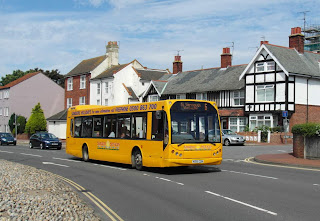 Sanders Coaches operate route 6 from North Walsham to Great Yarmouth at a frequency of about every 2 hours. Former Luton Airport bus W261CDN is pictured arriving in the town. 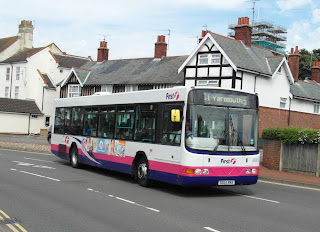 Finally for today, here is Volvo B10BLE 60813 (S664RNA) heading for Great Yarmouth town centre on route 5. 60813 is one of a number of former First West Yorkshire Volvo B10BLEs now operating with Eastern Counties - I managed to catch up with three during my stay.

Great Yarmouth certainly has an interesting bus scene and is well worth a visit if you are in the area. During high summer, the bus station is very busy and difficult to photograph in. However, if you walk out of the town you find some quieter locations. With the second hand Enviro200s also coming in soon (with presumably the new First livery), the Great Yarmouth bus scene is also changing.

For all of my Great Yarmouth photos, please click here!
Posted by bus80d at 11:00