Today we look back to an old, unique friend... 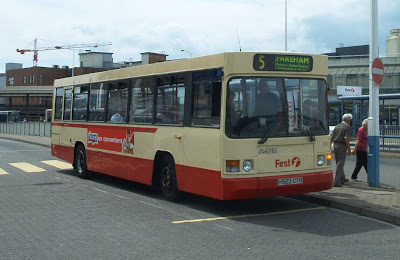 In the late 1980s and early 1990s, there were many brand new buses being tested by different operators as potential replacements to the Bristol RE / Leyland National as primarily purchased by the NBC. People's Provincial took on a wide variety of these buses, and in the early days one potential bus was the ACE Cougar, bodied locally by Wadham Stringer (later developed into UVG and Caetano, I believe). Only one of this variant was ever made (there was another Cougar, bodied by Willowbrook Warrior), and thankfully, this tiny piece of history has been preserved. 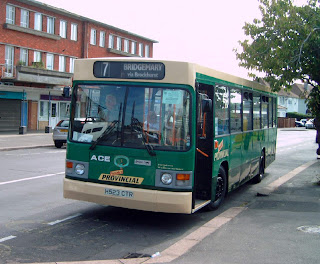 The Cougar saw regular service around the south coast with People's Provincial. When the company was bought by First in 1995, it received the red and cream local livery. It remained at Hoeford for all of its life. It tended to be allocated on any of the big bus routes along with the Nationals - thus was a regular site on routes such as the 5, 34, 72, 80 and 88.

H523CTR is now preserved with the Provincial Society, and is booked into this year's Stokes Bay rally in service. Click here if you would like any further details about the rally, that will take place on Sunday 4th August.
Posted by bus80d at 11:57