It is nearly time for Eclipse to be launched, and First Hampshire & Dorset's second bus priority corridor to be launched. Eclipse is the redeveloped Fareham-Gosport connection link, using some of the former railway between Fareham and Gosport. 14 brand new Volvo B7RLEs have been purchased for the route, and the first one is ready. See the First Hants & Dorset facebook site for photos.

It has been reported that the start date will be Monday 23rd April. Branded as "Eclipse - Above and Beyond" this new bus priority corridor is far more impressive and expensive than the last corridor on the A3 (Portsmouth - Clanfield), and should mean traffic congestion around Gosport on the A32 is alleviated. Maybe, passenger numbers will rise so high more buses will have to be purchased!
Buses have wi-fi, wood effect flooring, leather seats, GPS, real time updates, luggage space and more - all the features you would expect across any of the more inner city high profile bus corridors. 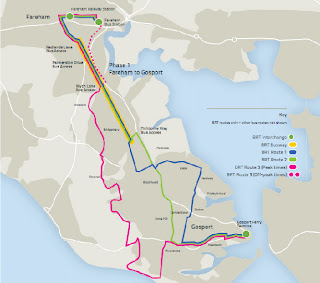