Out with the old, in with the new at Southampton

Followers of First at the moment are under a bit of a guessing game as to which areas are to see investment, and which areas are to be sold. Does Weymouth losing its recently acquired Tridents suggest it is up for sale? Does Plymouth receiving younger Tridents and 08-plated Enviro400s indicate it is no longer on the for sale list? One location that is seemingly safe under First is Southampton, where 10 brand new Enviro200s have entered service. 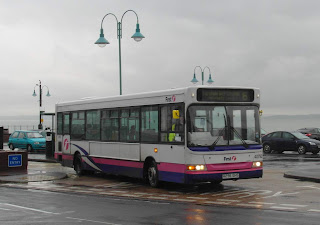 Firstly, out with the old. Of the many ex-Glasgow Darts previously in service in Southampton, only 4 remain. 40792 (R296GHS) is one of those remaining local though - popping up the coast and now allocated to Hoeford. It is pictured at a rain and wind swept Lee on Solent, heading for Fareham on route 6. Hoeford has received another also - 40790 - along with Hilsea receiving two Darts that have seen service at all three Hampshire depots now. The rest have gone elsewhere, with the lucky residents of Wales being the recipitants of a number. 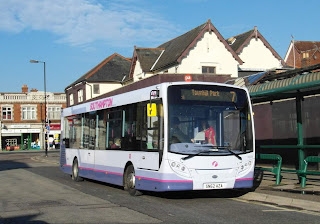 In with the new - 12 spotless Enviro200s - primarily allocated on route 7. 44529 (SN62AZA) is pictured here, loading passengers along St Denys Road in Portswood. The 7 is now eight buses-per-hour, competing with BlueStar 16 at three buses an hour. There does seem to be an increasing allegiance to BlueStar's younger B7RLEs and Citaros - however the new leather seated Enviros may now sway the balance back towards First. The Enviros also occasionally turn up on route 2, and assist the 2009-batch of Enviros on route 6. These are only rare occurances, however. 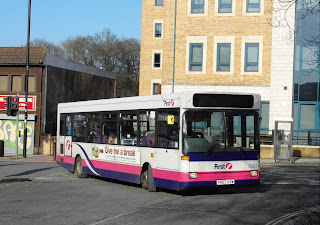 A few of the older Dart SLFs are still in service at Southampton. The 4 Pointer 1 bodied Darts new in 1996 are still in regular service, along with the entire batch of 1997 Darts. These will probably go in time, so I specifically focused my efforts on the buses during my flying visit on Sunday. This is 42507 (P407KOW) - FHD incidentally operate 42407 and 42507! Despite their age I regularly see the 4 Darts out in service - they can't be that unreliable. 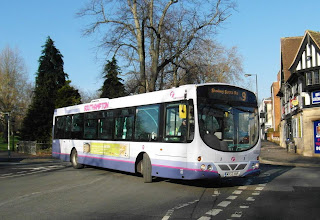 Finally, a wider look at the First Southampton fleet. All of the Volvo B7RLEs and Wright-bodied Volvo B7TLs are now in the fleet livery. 4 Millbrook Flyer Darts are assisted by 7 Solent Ranger Darts on the X4 from Hoeford. 66883 (MX55HHP) was new to Manchester, and is pictured heading for Sholing on the 9.