This week's Sunday Lost Scenes comes from Plymouth in 2009... 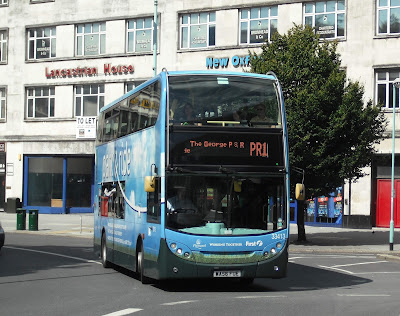 There has been a lot of press about fleet movements with First Devon & Cornwall at the moment. Every movement in or out seems to be given an extensive analysis. There are a number of factors for this - the forthcoming withdrawal from North Devon, the pending announcement of the holder of the Great Western railway franchise, regular route withdrawals combined with recent tender wins. The above shot shows some of the buses to have moved on - the lovely, leather seated Enviro400s bought in for Plymouth's Park and Ride.

These buses have been replaced by brand new Enviro400s of the same built - albeit they've been whisked off to the Olympics for the past month or so. However, where an enthusiast or passenger may like to see the existing buses cascaded on a Devon & Cornwall service, they've moved on. I think these would have been great on the X80 (Plymouth - Torquay), X81 (Torquay - Dartmouth) and 93 (Plymouth - Dartmouth). 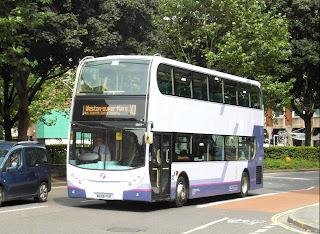 While the Devonian residents miss out on improved services, the Weston-super-Mare to Bristol corridor has benefited. Here is a view of 33413 from yesterday, being the first First Bristol, Somerset & Avon bus into the new livery. 33413's sisters have also been painted into a rather eye catching livery for the X1, with only one remaining in Plymouth livery now.
Posted by bus80d at 17:03