Today we reminisce about to the first form of the Selsey Link branding... 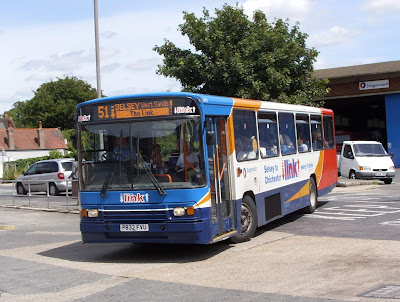 The Link is one of Chichester's premier city routes. Numbered 51, this route connects Chichester city centre and railway station with Selsey on the coast. In 2006, Stagecoach branded some of its former-Manchester Volvo B10Ms with "The Selsey to Chichester Link", operating the route at every 15 minutes. 20832 was one of those buses, and is pictured in the rather simple branding that it carries.

These buses were replaced with SPDs in 2008, and then in March of this year, the 51 received Stagecoach Gold branding, along with a brand new fleet of leather-seated, Wi-fi equipped Enviro300s. The route has come a long way in 7 years! I've realised I haven't actually posted my Stagecoach Gold photos on the blog yet, so these will hopefully come over the next couple of weeks.
Posted by bus80d at 11:00