This is the second instalment of my exploration of Portsmouth's city services. The first documented the operations on a Sunday or bank holiday - you can click here if you missed the first part. All shots are taken from last Saturday and again in Portsmouth City Centre - along Edinburgh Road Bishop Crispian Road - renamed back in 2011 apparently. 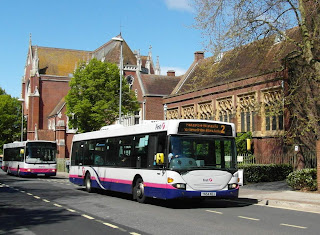 During Monday to Saturday, Hoeford's fleet of Scania Omnicitys are a much more regular sight, being the regular bus of choice on routes 1 and 3, with some workings onto the 2. Route 2 connects The Hard with Paulsgrove at a frequency of every 10 minutes. This route is operated by Hilsea and Hoeford depots, realistically meaning that any single decker bus from either of the two depots can appear on the route (except the Eclipses). This is 65013 (YN54NZJ), which has received a slightly different front end modification following an accident. Rumour has it that 8 of these buses will be refurbished and branded for the Solent Ranger in the near-mid term future. 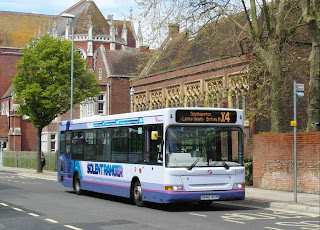 And here is the Solent Ranger! Presently operated by Hoeford's youngest 8 native Dart SLFs, the Solent Ranger is the only route into Portsmouth that actually is branded using the new livery. This version of the livery we on the FHD forum affectionately call "marmite" has gone down well in enthusiast circles, and these Darts are regularly full. Hopefully the increased branding and route awareness has helped it to grow. This is 42142 (S642XCR), having just set of from The Hard on its trip to Southampton. 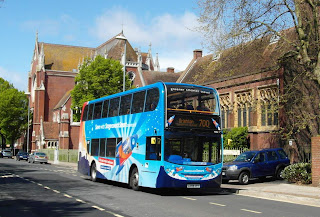 Stagecoach have just launched their new SmartCard across the South region. Therefore, a number of buses across the region have been branded to advertise this. Here is 15586 (GX59JYT), the former Jubilee bus, heading for Brighton on the 700. 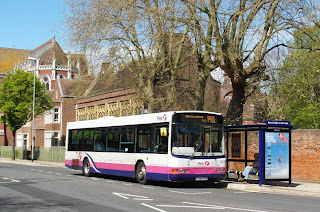 On Saturdays, First operate PR1 at a frequency of every 10 minutes in Portsmouth. This is Portsmouth's only P&R route, connecting Gunwharf Quays/the Historic Dockyard & the city centre with Northarbour car park. This is due to be improved in 2014, with a new car park and junction to the M275 being built at Tipner. The adverse effect of this, is that routes such as the X4, X9 and PR1 are held in a 40mph contraflow... Former Sheffield Volvo B10BLE 66199 (S799RWG) does the honours here. 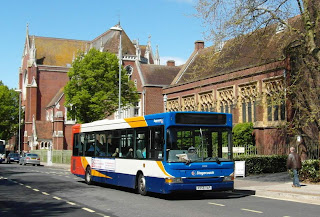 Stagecoach's route 20 and 21 are usually operated by the formerly Sail-branded Dart SLFs. However, recently a SPuD has returned to Portsmouth in the shape of 33058 (X958VAP), and is pictured heading for Havant here. Apparently, 33058 is not destined to stay in Portsmouth for too long, so grab it while you can. 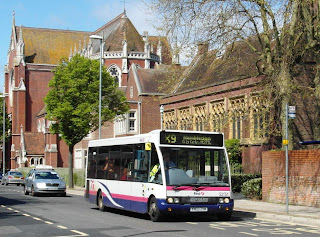 The Monday-Saturday X9 is operated by Hilsea's 5 Optare Solos, which are freed up to work city services on a Sunday. Here 53151 (YN03ZVW) heads for the small village of Hambledon, looking very smart in it's 10-year old coat and original of paint. 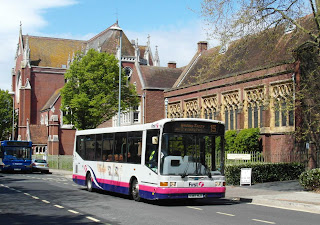 Former London Dennis Dart SLF/Marshall Capitals are harder to find in Portsmouth city centre during the week. These buses are usually kept on the 17 and 18 out of town, but usually a couple sneak onto the 7, 8, 13, 14 or 15. Here "DML"41387 (X387HLR) heads for Hayling Ferry, having just set off from The Hard. 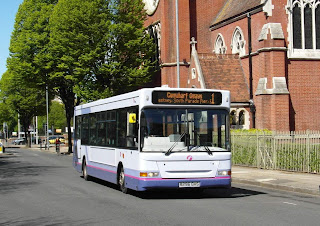 Finally, I'll post the only non-Solent Ranger bus in the new livery at Hoeford depot. 40792 (R296GHS) is a former Glasgow Dart, that was acquired by Southampton's Portswood depot in late 2005. No one is quite sure why this bus was chosen for a repaint, but its appearance is exemplary. To be fair to Hoeford and Hilsea, the external appearance of their buses improved greatly around late 2007-2008, and they have not let their standards drop since (apart from the odd one or two, or on snow/grit days!).

I really recommend Portsmouth for bus photography on a sunny day. It is one of the easiest cities I know where you can consistently get great photos, and there are many many locations with fantastic backdrops. Also, with First probably introducing 26 new Wright Streetlites onto the 7/8 soon, and Stagecoach introducing some new Enviros by the end of the year, the bus scene will have changed by the time we get to 2014.
Posted by bus80d at 11:00