This is just a quick "news"-like post to update readers on the situation in Southampton. I appreciate that many readers of this website are not members of the FHD or GSC forums, so hopefully this post will be of some use. 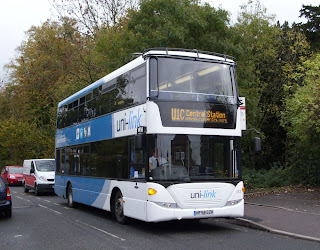 From Monday, the Unilink U1 service will operate every 10 minutes from approximately 0800 until 1830 during weekdays. The U1 connects the airport with new Highfield interchange (nearly complete now), Portswood, London Rd, City Centre, Central Stn and the National Oceanography Centre. 4 former London General Volvo B7TLs with Plaxton President bodywork have been acquired for this service increase, and will operate alongside the existing Scania Omnicitys. 1311 was out in service on Thursday, and all should be out and about come the new week. The other Unilink services only have minor timetable changes. 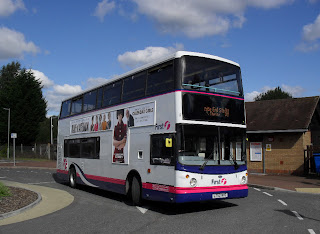 Furthermore, First are starting to introduce their new buses into service. Although the original plan for the Volvo B7TLs was to enter them into service all at once, 32251 and 32252 have been out in service. The 9 are to be primarily allocated to route 8 (Lordshill - City and Midanbury every 20 minutes) and 8A (City - Hedge End). I managed to catch up with 32251 (LT52WVO) earlier today at Hedge End railway station. There are also 10 Volvo B7RLEs from Devon & Cornwall to enter service - their departure is being covered on the Plymothian Transit blog. So far 66882 and 69248 have entered service, with 66881 and 66883 at Weymouth and due to move up the coast very soon. Once the 10 have arrived, they are intended to be allocated mainly to route 17/17A (Lordshill - Aldermoor - City), although so far they have been seen on the 7, 11, 12 and 17. 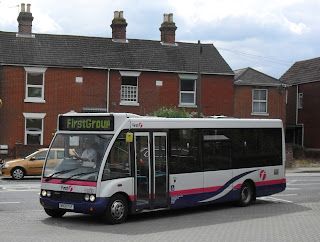 In addition, there is a forthcoming route alteration - First's 16A extension from Hamble to Hedge End is to be scrapped, replaced by extensions of route 26 from Fareham at approx. every 90minutes. The extended 26 is to be operated primarily by the recently acquired former Devon & Cornwall Optare Solos, from Hoeford depot. I've only managed to capture one so far - here is 53008 (W808PAF) out of service entering Fareham bus station.
Interesting times in Southampton!
Posted by bus80d at 13:59