Catch them while you can!

Some of you will have noticed that two of the former London Volvo B7TLs entered service during the week - 32251 operated route 3 for an hour on Wednesday, with 32252 on route 8 yesterday. These buses have replaced two Volvo Olympians - 31820 and 31830 (P920RYO and P930RYO), which have been withdrawn pending transfer. 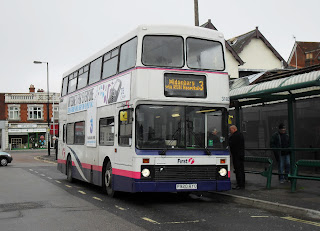 ﻿The last Olympian I had to photograph was 31920 - P920RYO - now withdrawn at Empress Road. The LED has been taken out and placed in one of the new Volvo B7TLs.
These Olympians were new in 1997 to London General as their NV120/NV130 respectively. They were then acquired by First in 2006, and placed into service in Southampton replacing Dennis Arrow double deckers, which were transferred up to Manchester. 9 were acquired directly from London General - P908, 20, 21, 25, 26, 28, 30RYO and R277, 278, 336LGH (First Somerset & Avon also acquired a couple, now in service in Cornwall). 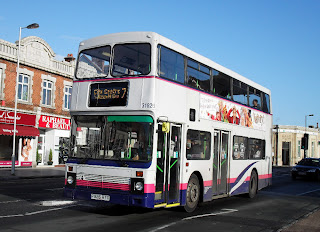 They entered service having been repainted and reupholstered, although many other things stayed the same. The centre door and the London style destination were kept, although the blinds have been replaced by LEDs now. 31825 even ran around for a long time with "London General" on the registration plates - I'm not sure if this has been changed recently. Here is 31826 (P926RYO) in Portswood, last November. 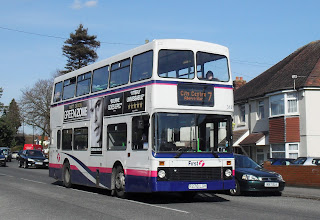 All of the 31*** Olympians are due to transfer later this year* - I'm not sure if I can reveal the destination- once all the Volvo B7TLs arrive. I quite like this batch - my favourite is 31878 (R278LGH) - pictured to the right in Swaythling. It was the first one I rode out of the batch, and I was the first person (as far as I know) to photograph it in service when it arrived (on its own, then), back in October 2005.
Although I'm not sure the rate at which the Volvo B7TLs will arrive and then enter service, the former Go Ahead Olympians' time at FHD is now limited so grab any photos as quickly as you can. They are usually found on route 4 (City - Totton), 5 (City - Lordshill) and 7 (City - Bassett and Millbrook Tesco (7A)).
* It has been suggested that 31825 (P925RYO) will remain at FHD as it has a tachograph and is required for specific school work.
Posted by bus80d at 21:11