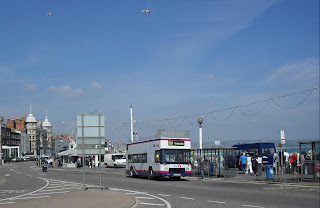 It has been confirmed by sources within First Hants & Dorset that MOD571P's last day in  operational service will be Saturday 25th September 2010. Engineers have been asked to ensure that MOD is serviceable, and she will be out one last time on route 501 to Portland Bill. This will mark the end of the regular operation of Bristol VRs within First, and all major group companies along the South Coast also. 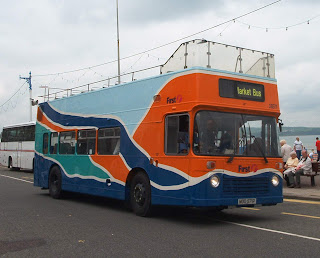 MOD571P, in its short term guise as 38571, along Weymouth Seafront on a cloudy 2nd June 2004, freshly painted into an all over advert livery for the Waterside Holiday Park.
Where this is a sad day, it could have occured a few years ago, so we must be thankful she has lasted so long. I had what I thought was my last ride on her last summer, all the way to Portland Bill and back. It was an incredibly windy day, but she effortlessly navigated the hills around Weymouth and Portland and it was a very enjoyable ride. Hopefully someone will preserve her - maybe even First as a heritage vehicle such as Eastern National's VR - but in the present economic climate I fear she may be lost to the scrap heap.
See you on the 25th with a bit of luck!
Posted by bus80d at 23:19