The bus industry frequently changes, with route alterations, arrival or departure of new buses and more. One of my favourite locations for bus photography is Bude, North Cornwall. It is rather difficult in Bude to take good photos - especially if the sun is out - due to weight of traffic and holiday makers - but I have found a soft spot for it due to the rapidly changing bus scene. In 2002, the first time I visited as a bus enthusiast, First were still on the 122 / 124 to Boscastle, Tintagel and Newquay, and much has changed since then! I came back from the town less than a month ago, and already things have changed. 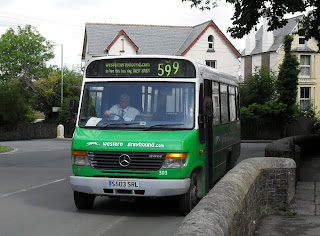 Route 599 was introduced by Western Greyhound replacing Hookways' X90 from Bude to Exeter, and First's 285, a tendered route connecting Bude with Holsworthy, via various villages not served by the X9. Where the Exeter journeys on the 599 are unaffected, all of the short 599 journeys have been withdrawn and replaced by a dial-a-ride service. Western Greyhound's 520 now operates to the villages of Bridgerule and Pyworthy on Wednesdays only, for Holsworthy market, leaving them without any regular conventional bus service for the other weekdays. Here is Vario 503 (S503SRL) pictured on one of the now withdrawn short workings on 11th August, at Holsworthy church. 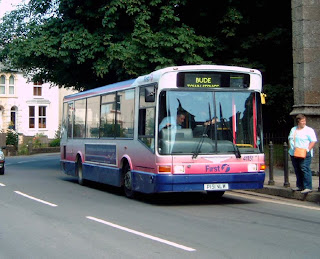 First Devon & Cornwall's 41151 (P151NLW) in Holsworthy on the old 285, again outside Holsworthy church. The number display could not display 285, so the bus ran simply displaying Holsworthy and Bude. Pictured on 3rd August 2006. 41151 has since moved onto First Cymru. 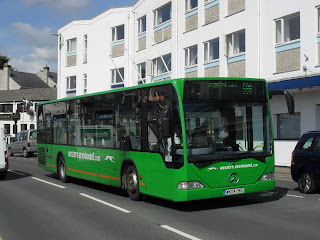 The second change since my visit a month ago sees the introduction of a second Mercedes-Benz Citaro in green. Fleetnumber 207, registered BU53ZWZ, and acquired from Worths, Oxford, it has been added to the fleet to provide a back up vehicle on the 599 and extra capacity on the 576 to Plymouth. 207 joins fellow green-livered 206 (WK04OKE), pictured here along Bude strand on 8th August this year on a Sunday 599 to Exeter.
Note: Western Greyhound have also introduced another brand new Citaro on the Truro Park & Ride contract - WK10AZU. Click here for photos if it in service. The arrival of 207 and 208 brings the total number of Citaros in service with WGH to 8.
Posted by bus80d at 12:56