First Hampshire & Dorset are, at present, receiving 9 former First in London Volvo B7TLs with Alexander ALX400 bodywork. Fleetnumbers 32251 to 32259, these buses will go onto routes 8 and 8A (Lordshill - City Centre - Townhill & Midanbury (route 8) and Hedge End - City Centre (route 8A), along with the native Wright bodied Volvo B7TLs acquired by Portswood depot in 2007. I will take this oppurtunity to explore some of the recent buses acquired from London by First H&D... 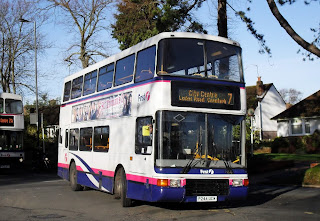 The most recently acquired buses that began life with London are two Volvo Olympians - N310JBV and P244UCW, pictured here. Numbered 34044 now at Hampshire, it was acquired from Centrewest, via Bristol. 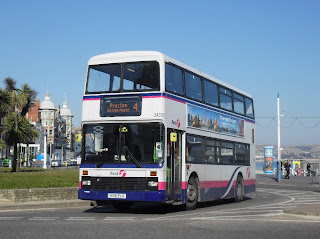 First Hants & Dorset 34336 (H136FLX) was new to London Buslines as their fleet number 36, passing to First Centrewest's operation. The First London branding was introduced in 2001, and 34336 still carries a number of First London notices inside. 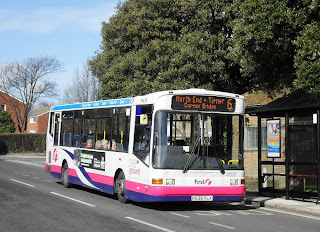 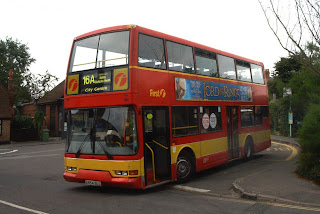 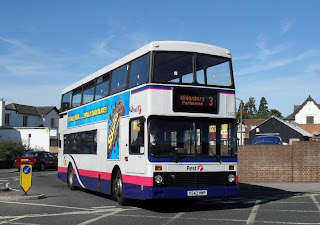 Not all ex-London buses were new to First (or the companies they took over) - indeed Southampton and Hoeford operate 3 Volvo Olympians acquired from Stagecoach in London. Here is 34033 (P543HMP) in Portswood - all three of this batch still retain their centre door and a number of London notices within. 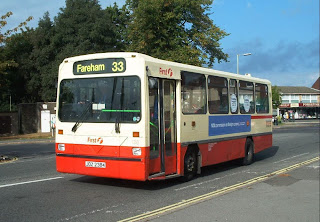 Finally for this evening is Dennis Dart/Wright 45394 (JDZ2394), new to London Buses Ltd. as their DW94. Acquired from First Beeline in 2000, Hoeford operated a total of 15 of these buses in all, including the first example, JDZ2300. The last bus withdrawn was 45389, the last to wear First Provincial Red and Cream livery.
None of the Volvo B7TLs have entered service yet - the word is that all 9 will arrive before they enter service. So far 32251, 32252 and 32253 have definately arrived at Empress Road, and these are being prepared for service.
Posted by bus80d at 18:31