This week's Sunday Lost Scenes comes from Oxford in 2006... 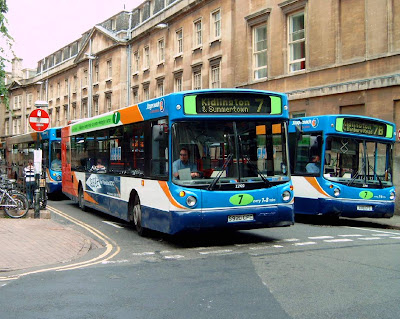 Stagecoach Oxford 22920 - S920CFC alongside 22918 - S918CFC - Oxford (Madgelin St East) - 7th August 2006
One of the main trunk routes in Oxford is the route to Kidlington. For many a year, Stagecoach's 7/7A/7B fought with City of Oxford's 2/2A/2B over the route, with both companies improving their buses along the way. Back in 2006, the route was in the hand of 10-year old MAN single deckers, such as those illustrated above.
Since this image, the Oxford - Kidlington corridor has seen some major, and unique updates. Firstly, Stagecoach has reinvested in the route twice - firstly with new MAN single deckers in 2009 followed by Enviro400 Hybrids in 2010-1. Secondly, City of Oxford have also invested in the route, running their own diesel powered Enviro400s rather than the previous Mercedes-Benz Citaros. Finally, now both companies co-operate for the benefit of the customer. Both Stagecoach and OBC now operate route 2, with frequencies shared between the operators. Both companies use Enviro400s of 1-2 years of age. 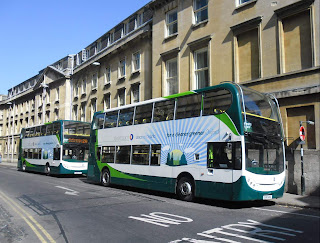 Although I haven't pictured Go Ahead's offering, here is a picture to show how far things have come. Pictured in the same location over 7 years later, the route features buses that are of the very cutting edge of technology. This really is transforming travel.
Apologies for the late post, I was in Oxford yesterday taking this photo, amongst others!
Posted by bus80d at 14:44