With the dull, grey weather recently making it very difficult for good quality photography, my first Sunday Lost Scenes of the year takes us back to summer 2007... 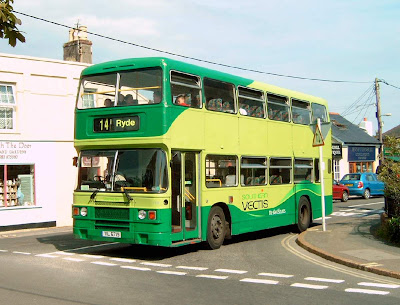 The first of these grand old buses are leaving the services of Go Ahead. This batch of all-Leyland Olympians have provided years of sterling service for firstly Southern Vectis, before moving onto Wilts & Dorset and/or Damory. These buses suited many of the liveries that they wore - however I've got to say the mushroom and cream Southern Vectis livery, and the Best Impressions livery - as illustrated above - were the best in my opinion.

TIL6719 was one of 7 Vectis Leyland Olympians to join the Damory outfit of Go Ahead South, following the delivery of Scania Omnicity double deckers to Southern Vectis. 719 was last allocated to Poole. Two of its sisters - G715/6WDL - have been bought by Xelabus - and one was at the Winchester Running Day on 1st January.

Here's to brighter and dryer times ahead this year - and to think we started 2012 with hose pipe bans and drought warnings! Down south at least it is supposed to turn sunny, cold and crisp by the end of the coming week - a perfect January day.
Posted by bus80d at 14:24