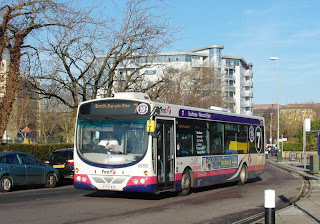 With route 40 somewhat in decline, suffering from a shortage of Volvo B7RLEs, operated by Darts and only operating every 15 minutes, the new 7 seems to have been re-energised. Route 7 connects Southsea with Wecock Farm, but now at every 10 minutes. It is operated by the same branded Volvo B7RLEs, but these have also seen a refresh with new bluey-purple branding. 69382 (HY09AOU) is pictured heading through Cosham on a 7 for Southsea. 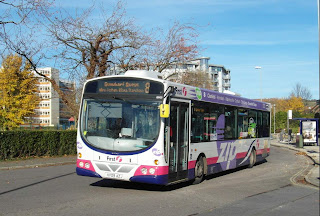 Route 8 is the new 41 - and principally unchanged. Still every 15mins Mon-Fri, now every 15 on Saturdays and every 20 on Sundays. The Volvo B7RLEs' branding has not been updated except for the 41s being removed and the 8s added. In theory, Spring 2013 will see a delivery of something brand new for route 8 in conjunction with the status as a High-Quality Zip route - maybe this is a reason the branding has been left. It is crazy to think that 69400 (HY09AZJ) and it's sisters are two months away from being 4 years old... 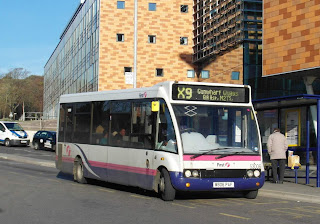 As discussed in my Solo 734 piece, the X9 is a combination of routes X42, 45 and 45A. Here, former Devon & Cornwall 53006 (W806PAF) is pictured heading for The Hard. Until Monday, the First X9 competed with Stagecoach 20 on the QA Hospital to The Hard via M275 corridor. Stagecoach have moved away now - the 20 adds a greater Stagecoach presence to Cosham and Stamshaw now - so will the X9 loads increase? Time will tell - perhaps Solos and the narrow lanes will have to be moved away from this route. 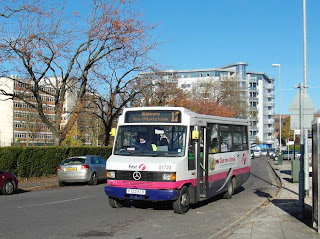 The 12 is a new route connecting Port Solent with Northarbour Tesco, Cosham and Highbury college, and tends to be operated by the remaining First Mercedes-Benz 709Ds or Mercedes-Benz Varios. 51723 (P723KCR) does the honours here, on the first Sunday of operation. 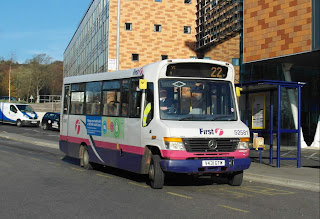 The 22 is the second Cosham town service, connecting Paulsgrove with Cosham, Drayton and Farlington. The 12 and 22 provide Cosham with 4 buses an hour to QA Hospital, on top of the 12 an hour provided by the 2, 3 and 3A. The 12 and 22 are both operated by two buses Mon-Sat. Here former First Essex Vario 52581 (V481GTW) does the honours.

It is also worth pointing out here two further changes - Stagecoach have muscled in on the The Hard - Southsea corridor, operating route 20 Mon-Sat every half hour and route 23 on Sundays at three an hour. (Route 23 remains on its original route Mon-Sat).

In part 3 we'll look forward to potential further changes for the network and the new network from the photographer's point of view. Thanks for reading.
Posted by bus80d at 11:00