I'd like to wish a Happy New Year to all. I hope those of you that went to Winchester today had a good time. Today seems as good as place as any to begin a new, irregular-ish feature I'm going to call Welcome Back. In this feature, I'll post a variety of photos that I'd lost on fotopic but have since returned after they opened up (what appears to be some of) their servers.

Following the demise of fotopic, I found that I had stupidly left a gap from summer 2003 until early 2004, where it appears I had forgotten to back up any of my photos. This meant I had lost the majority of my Leyland National photos, when the final 4 were in service with First Hampshire at Hoeford, and they were out and about on everyday work. 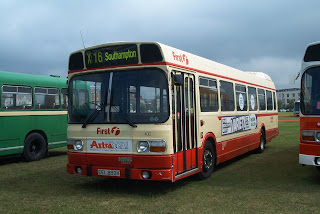 The last remaining Mk1 National in service with First was Volvo engined EEL893V - numbered 400 in the Hoeford fleet at the time. I was never lucky enough to catch it in service, but did photograph it at the last ever Southsea Spectacular rally in 2003. 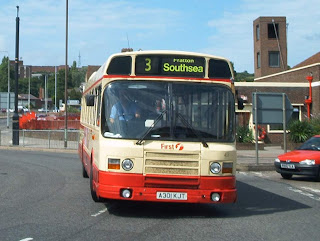 I used to be rather useless at photographing the last Nationals. However, 401 (A301KJT) seemed to turn up wherever I was. It is pictured here in summer 2003 heading for Southsea on route 3. It is heading through Cosham at the time. 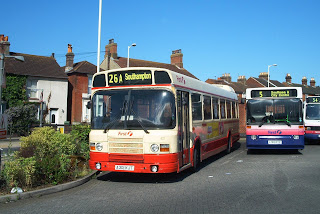 Here's another view of 401 - this time in Fareham bus station taken on 29th July 2003. It is parked up on route 26A - a route operated jointly with First and Solent Blue Line, connecting Fareham and Southampton via the A27 (26A) or Highlands (26), Botley, Hedge End and Bitterne. 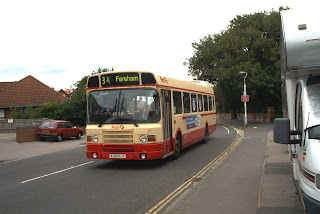 Another view of A301KJT here, pictured arriving in a rather murky Lee on Solent on a short 34. The 34 is now route 5, and operates hourly every day, interworking with route 4 (route 72) and 5A (route 35) to create a half hourly frequency from Gosport to Stubbington, and then Stubbington to Fareham. 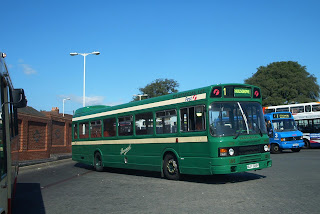 My favourite shot that I'd lost is of the last Leyland National to earn money for First. 432 (NLP389V) was painted into the Green Provincial livery for the summer 2003 Provincial 125 celebrations. Fresh from paint (but sadly after the logos had been applied), 432 was parked up in Fareham bus station having pulled up out of service off of route 1. Route 1 is now no more with the recent Portsmouth network changes, although the bus still survives in preservation.

With NLP389V attending Winchester today, that brings us nicely back the beginning of the post. Again - apologies for the lack of posts recently. With Sunday Lost Scenes and the occasional "Welcome Back", plus other features, I hope to have a structure in place this year that will mean at least 7 or 8 posts a month.
Posted by bus80d at 21:11