First acquired a one off Optare Solo in 2003. It entered the fleet as number 734, and was registered as YN03ZVW. It was the first new bus at Hoeford depot since the 1998-9 delivery of Volvo B10BLEs - and most of the later examples went to Hilsea anyway. It would also be the last brand new bus to enter service at Hoeford until the recent Eclipse Volvo B7RLEs, that entered service last year. 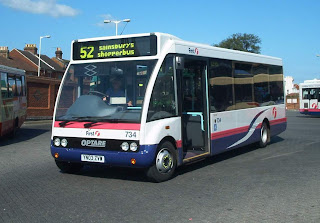 734 entered service on the recently launched Sainsburys Shopperbus routes. The 51, 52 and 53 operated weekdays and served the suburbs of Fareham, such as Titchfield, the Highlands and Wallington. All routes were operated by this Solo when it entered service. It is pictured here in its first week of service - looking excellent, even if the dot matrix display hasn't quite been programmed with correct grammar. 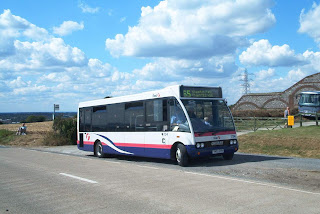 This meant that 743 was free on Saturdays and Sundays. On Saturdays it tended to operate any of the routes operated by small Darts or Mercedes-Benz 709Ds, and I have photos of it operating routes 63 (Whiteley and Havant), 78 (Southampton via Bitterne) and 94 (Wickham), amongst others. However, during summer 2003 it was released onto the Summer Special route 65. Route 65 only lasted for one year, and operated from Fareham railway station to Staunton House, via Fareham, Portsdown Hill (Fort Nelson Armoury) and Havant. It is pictured here having pulled up outside of Fort Nelson. Since 2003, has served Fort Nelson, and following the withdrawal of route 38 in 2009, no service* buses serve Portsdown Hill. 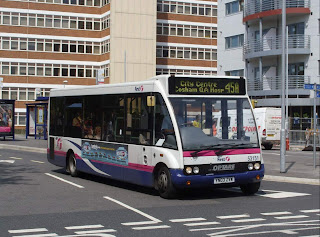 January 2004 saw the addition of two further Solos from Bradford to the Hoeford fleet. January also saw First's national fleet numbering system reach First Hants & Dorset, which saw YN03ZVW being numbered 51239. However, the number was duly dropped a few months later, and the Solo was renumbered 53151. In 2005, with the delivery of a new Solo to Hilsea, it moved over to Portsmouth, to operate the contracted-low floor service 45A - connecting Portsmouth city centre with Cosham, the QA Hospital, Waterlooville and Denmead. 53151 has remained at Hilsea ever since.

Today, YN03ZVW is one of 5 Solos at Hilsea that rotate on the new X9 route. The X9 is a combination of the former X42, 45 and 45A routes, connecting The Hard with Portsmouth City Centre, the M275, QA Hospital, Waterlooville and Denmead every half an hour, with hourly extensions to Hambledon. It has been observed by enthusiasts the Solos are struggling for capacity at times, and with new buses for Portsmouth expected over the course of 2013, it will be interesting to see where this unique Solo turns up over the coming months and years.
Posted by bus80d at 15:17